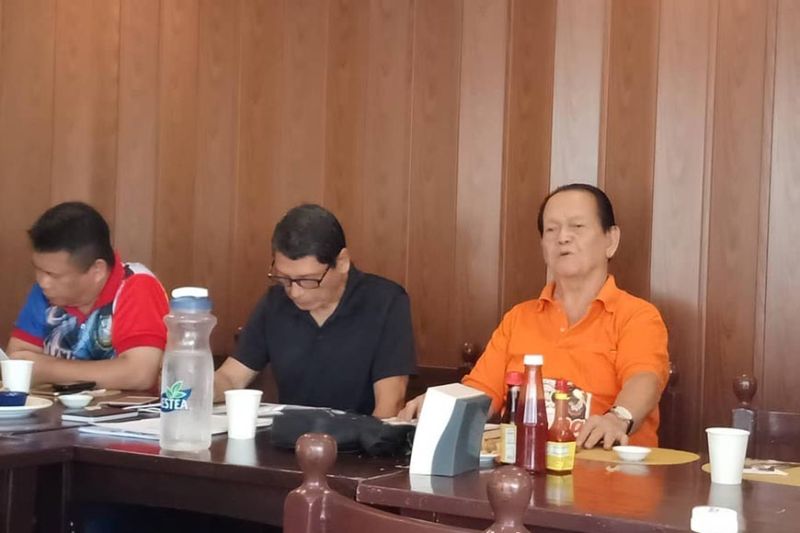 WONDERING BOY. David “Boy” Odilao Jr. (in orange shirt) talks during a press conference in Cebu City on Thursday, Sept. 19, 2019 about the problem concerning the Sinulog Foundation Inc., which was superseded upon the creation of the Sinulog Governing Board through an executive order issued by Mayor Edgardo Labella. (SunStar photo / Dwight Ligan)

FORMER Customs collector David “Boy” Odilao Jr.—the father of the Sinulog festival—has questioned the Cebu City Government’s creation of a governing board that will oversee the festivities in 2020.

He asked why there is a “super body” that subordinates the Sinulog Foundation Inc. (SFI), which is currently chaired by Vice Mayor Michael Rama.

In 1980, Odilao started the Sinulog parade by assembling physical education students from eight universities and colleges in Cebu as the first dancers.

On Aug. 23, 2019, Mayor Edgardo Labella issued an executive order creating the Sinulog Governing Board (SGB), which will oversee the Sinulog 2020 festivities.

The SGB will serve as a regulatory board for the SFI; it has the right to review and approve all resolutions and actions of the SFI’s executive committee.

The board will be composed of 24 members, including Cebu Gov. Gwendolyn Garcia, eight mayor’s appointees, five trustees from the SFI, two members of the City Council, director of the Cebu City Police Office.

Rama publicly complained about the creation of the SGB as he was not consulted by Labella beforehand.

On Thursday, Sept. 19, Odilao and his fellow members of the Fraternal Order of Eagles met in an uptown restaurant to discuss in a press conference the controversy surrounding the SFI.

Odilao urged Labella and Rama to settle their differences over the management of the Sinulog festival in order to have a peaceful 40th staging of the cultural event in 2020.

Labella and Rama are members of the order; they were not present during the press conference.

Odilao said he was able to talk to Rama regarding the SGB, but not yet with Labella since the mayor often went out of the country.

According to Odilao, something is wrong that is why he sees the need to talk with Labella. (DRL)