A more resilient Naga one year after landslide 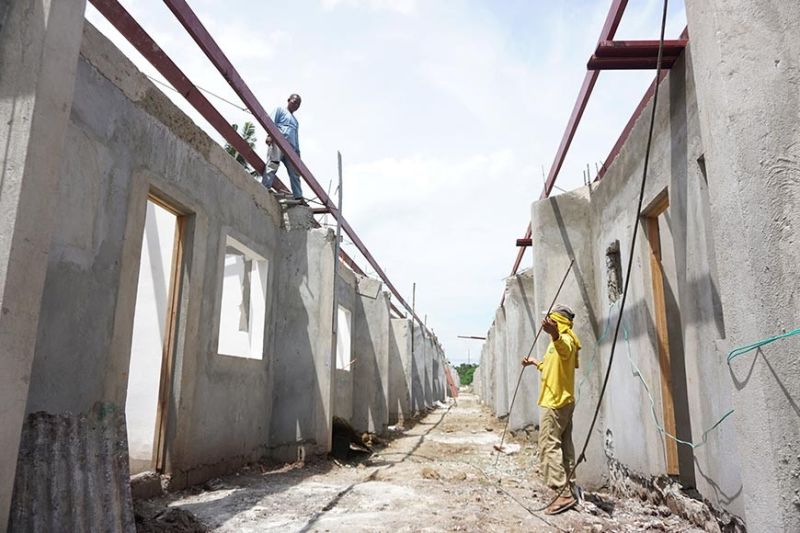 NEW HOME. Before the year ends, 54 families who were forced to leave Sitio Sindulan in Barangay Tina-an, City of Naga will move into the City Government’s relocation site in Sitio Tapon in Tina-an. (SunStar photo / Alex Badayos)

ONE year after a massive landslide struck the City of Naga in Cebu, the National Government’s housing project for 192 families who were forced to leave Sitio Sindulan in Barangay Tina-an have yet to be constructed.

Two bodies remain unidentified because the DNA test has yet to be conducted.

While the wounds of the families of 78 people who died in the tragedy have yet to fully heal, the people of Naga are moving forward from the tragedy.

For Acting Mayor Kristine Vanessa Chiong, the tragedy that hit the southern city had encouraged them to become more resilient.

The City Government has implemented regulations to prevent similar disasters and has taken steps to equip residents to be prepared for calamities.

“We’ve learned a lot of lessons from the tragedy. But I think the most important one is for cities and local government units to really equip themselves to ensure that they are self-reliant, ready in times of calamity and work on strengthening our coordination and partnership with line agencies,” she said.

It happened too fast, some survivors recalled, taking the lives of those who had attempted to flee and those who were still asleep.

After searching for more than two weeks since the massive landslide, the City Government terminated its rescue and retrieval operations.

Seventy-eight persons were buried alive and around 15 body parts were recovered from the site.

The acting mayor said the City has already written a letter to the Department of the Interior and Local Government to fast-track the identification of the body parts and two bodies through deoxyribonucleic acid (DNA) testing by the National Bureau of Investigation’s forensic experts.

“I wrote again to NBI central office requesting the fast-tracking of the results so that at least, the families, before the anniversary, ideally would have closure. But it’s something beyond our control,” Chiong added.

Aside from taking lives, the massive landslide had also destroyed homes and properties.

It left 8,091 individuals or 1,947 families homeless for almost three months. They stayed in 11 evacuation centers in Naga and San Fernando town.

Following the landslide, the Department of Environment and Natural Resources (DENR) delineated the affected area as a “No Permanent Habitation Zone” or “Danger Zone,” prompting the agency to recommend the permanent relocation of 418 families who were living in this area.

Of the number, 213 families had opted for relocation and will benefit from the Naga Permanent Housing Project of the National Government and the ongoing construction of the City-funded housing project.

The National Housing Authority (NHA) had committed to build 192 houses on a portion of the Balili Property in Barangay Inoburan. The NHA has started the bidding process for the construction of the housing units, which is expected to be finished in 208 calendar days.

The City, on the other hand, had pledged to build around 50 houses in Barangay Tina-an. Construction began last March and is expected to be completed before the year ends.

Some families who availed themselves of the building assistance have returned to Tina-an, while others have relocated to other barangays and other towns.

Bulk of the expenditures went to financial humanitarian assistance to 455 families whose houses were within the critical zone at P28.8 million.

Other expenses include medical services for the survivors, relief operation assistance, building cash assistance and electricity bills of the evacuation centers.

The City also reported receiving P28,624,976.35 in cash donations from various local government units, Cemex Philippines Foundation Inc. and other private donors, which was used for the various cash assistance to the affected families.

On Ground Zero, the landslide site, the City continues to monitor Apo Land and Quarry Corp.’s (ALQC) implementation of the second phase of the retaining wall, which will prevent continued soil erosion, especially during the rainy season.

The first phase of the hazard reduction plan has been implemented.

It included the construction of the Sindulan safety wall, which serves as a protective barrier of the community from the remains of the landslide.

But the Mines and Geosciences Bureau (MGB) 7 said that even if some aspects of the hazard reduction plan (HRP) they required of ALQC have been implemented successfully, the risk of another landslide in the area is still there but at a lower percentage.

Engineer Armando Malicse, MGB 7’s Mine Safety, Environment and Social Development Division chief, said that as of this month, ALQC is in the process of cutting a vulnerable slope along the crown of the landslide area, and flattening the debris to stabilize it.

In a statement, ALQC and Cemex Philippines’ corporate communications head Chito Maniago said they are already in the “advance stages” of completing their slope stabilization operations, which will be finished in 2020.

In the meantime, Maniago said their quarrying operations in the City of Naga remain suspended on DENR’s orders after the landslide.

Aside from monitoring the implementation of the HRP, the MGB 7 continues to monitor the landslide-affected area, especially the danger zone.

As for small-scale quarry operations that are regulated by the Provincial Government, Chiong said the City Council had passed a resolution stating that Naga will no longer accept new quarry applications.

In the meantime, Naga will focus only on the renewal of the eight existing small scale permit holders and monitor their operations.

As for large-scale operations or mineral production sharing agreement partners, Chiong said they are regulated by the DENR.

There are five large-scale quarry operators in Naga, one of which is Cemex Holdings Philippines Inc.

Since it has no jurisdiction over these permit holders, Chiong said the City is tightening its monitoring efforts instead.

Aside from slope stabilization works, the City of Naga has also implemented greening programs in 10 pilot areas identified as landslide-prone.

Chiong said they are propagating bamboos as part of their slope protection measures.

The City has also installed perimeter fences in landslide-prone areas and has put up more warning signs in high-risk areas.

The City is also looking into an incident command system that will initiate a text brigade to constituents of Naga when calamity strikes.

All 28 barangay captains in the city are also set to undergo incident management training seminar in October to capacitate villages.

“It’s important that the city itself is ready and equipped. At the end of the day, we’re the ones left to solve our problem. Although we’re grateful for all the help we received, it’s really the City that will handle and manage any calamity recovery and rehabilitation efforts. The capacity of Naga and the help we’ve received and the resilience of the people of Naga fueled our road to recovery. It is still an ongoing effort. There is much to be done, but I feel that we are in a better place compared to a year ago,” Mayor Chiong said. (With JKV)