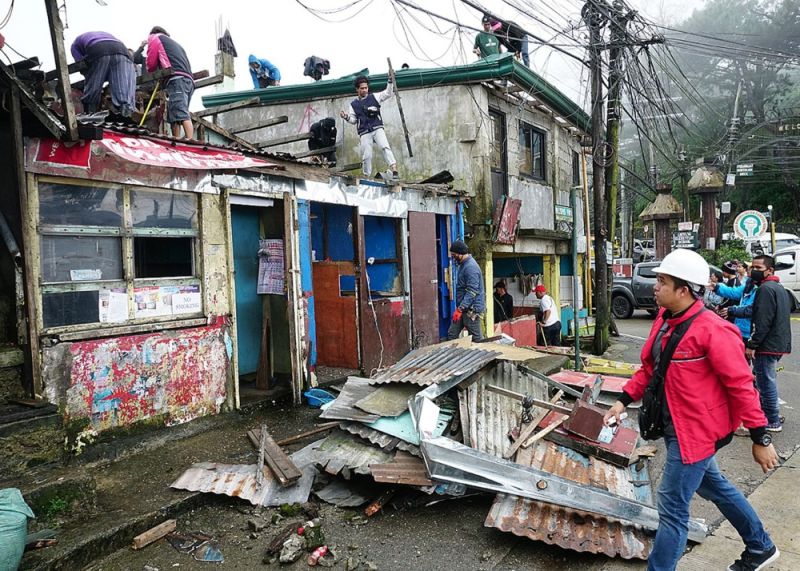 BENGUET. Some 37 out of 267 structures were demolished along Marcos Highway on Thursday in compliance to President Rodrigo Duterte’s order during his 4th State of the Nation Address (Sona) last July. (Photo by Jean Nicole Cortes)

ERRING establishments along Marcos Highway have been taken down.

On the orders of Baguio City Mayor Benjamin Magalong, 37 out of 267 structures were demolished as part of the initial implementation of the road clearing on Marcos Highway Thursday morning, September 19.

A team composed of the Department of Public Works and Highway (DPWH) with the City Buildings and Architecture Office (CBAO) backed by the Baguio City Police Office (BCPO), Benguet Electric Cooperative (Beneco) and the City Disaster Risk Reduction Management Office (CDRRMO) were present in the Thursday take down.

Under the circular, local executives were ordered to achieve “significant results” in clearing their streets of obstruction, including those portions used as parking spaces for vehicles, basketball courts, vendor stalls and, in some cases, barangay halls.

Base on the inventory and assessment of DPWH Baguio District Engineering Office (DPWH-BCDEO), a total of 273 structures are in violation of the 30 meters RROW for national roads like Marcos Highway.

Marlo Iringan, Department of the Interior and Local Government-Cordillera director, said local government units in the region are taking advantage of the President’s order to get back public roads, which they were unable to do in the past years due to several reasons.

“There is a good response from the LGUs now that they have the reason to make people comply,” he said.

He said LGUs have been required to submit regular accomplishments, which the DILG will consolidate and submit to the Office of the President on or before October 11.

Iringan said LGUs that will not be able to do a 100 percent compliance will be made to explain and if an unacceptable, possible penalty will be meted them. (With a report from Philippine News Agency)