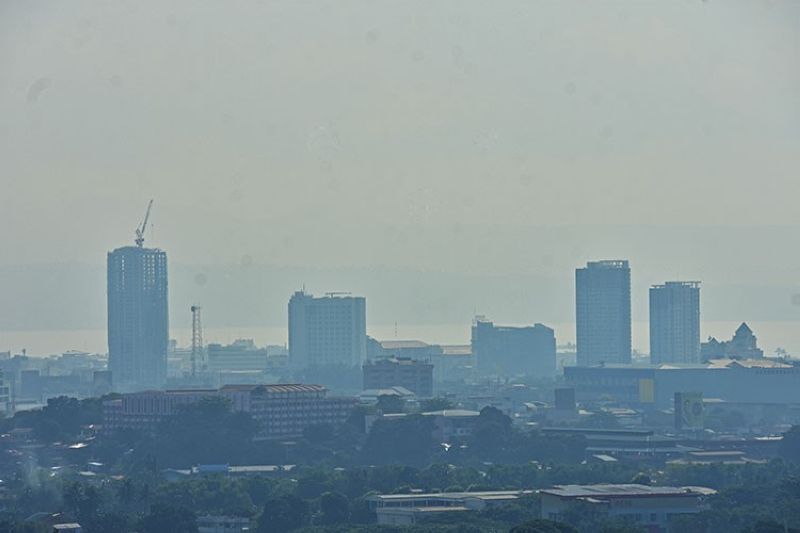 DAVAO. As of September 19, 2019, the Environmental Management Bureau-Davao has recorded a decrease in the level of haze experienced in Davao City, with a recorded good quality of air. But it continues to warn individuals with respiratory problems to take extra precautions when outdoors. (Macky Lim)

THE air quality in Davao City is still safe despite the presence of haze covering parts of the city during daytime.

Haze is an atmospheric phenomenon in which dust, smoke, and other dry particulates obscure the clarity of the sky.

The haze, brought about by the fires, has reached neighboring countries like Singapore, Malaysia, and the Philippines.

In the country, it has reached some parts in Visayas and Mindanao due to the low pressure area and the habagat (southwest monsoon).

Based on the air quality index (AQI) as of 8 a.m. Thursday, September 19, the sensors at the Francisco Bangoy International Airport recorded particulates reaching 29 micrograms per normal cubic meter, as conducted by the Particulate Matter (PM) 10 test, while sensors at the Calinan National High School recorded 61 micrograms per normal cubic meter.

"Our air quality is good all throughout, although there have been some increase. But, overall it is in a good condition," Dapitanon told SunStar Davao in a phone interview.

He said the haze had reached the city last September 14, where there was a significant increase of air pollutants.

Dapitanon said the haze is visible during daytime brought about by the saturated humidity of the air.

"The concentration of the particulate matter reduces in the afternoon or in the evening," he said.

However, he said the pollutants had reached its lowest level last September 17.

"Possibly, we would be experiencing it for days until next week wherein there will be changes in the wind direction," Dapitanon said.

Meanwhile, the Department of Health (DOH)-Davao, in its official Facebook page, reminded the public to take precautionary measures as the air pollution brought by the haze could pose respiratory tract infections and cardiac ailments.

DOH said elderly, children, and those with the above-mentioned conditions should stay indoors with good ventilation, wear appropriate face masks when going outside, refrain from physical activities in heavily polluted areas, and exercise extreme caution when on the road to prevent accidents.

The health agency also reminded motorists to use headlights or fog lights while driving during the night, and to stay away from low-lying areas where smoke and suspended particles may settle.

The DOH also reminded patients suffering from difficulty in breathing, coughing, chest pain, and nose/throat irritation to consult a doctor for medical intervention.