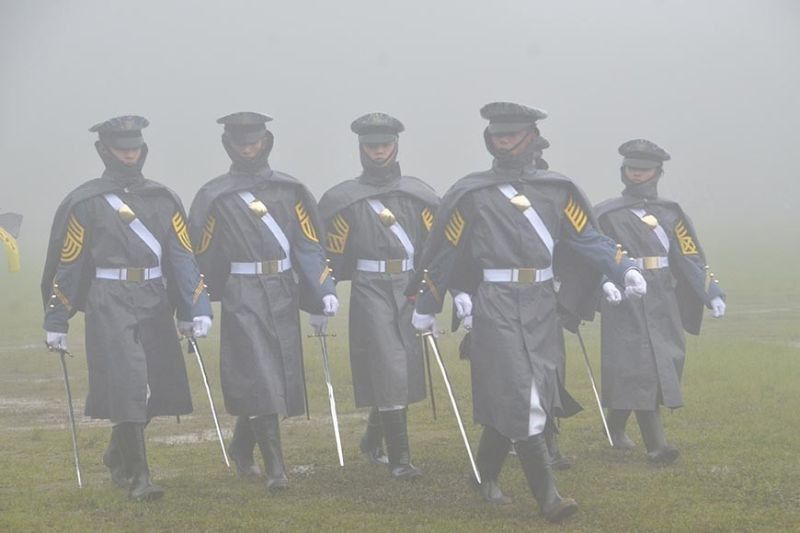 BAGUIO. In this photo taken on August 10, 2019, Philippine Military Academy cadets held a parade and review at the Borromeo Field amid the fog. (SunStar Baguio File Photo)

A POLICE official confirmed on Friday, September 20, that a Philippine Military Academy (PMA) cadet had died from hazing injuries.

Dormitorio, a freshman, suffered from internal hemorrhage in the stomach and lower abdomen. He was also found to have bruises on his stomach.

Dormitorio had complained of stomach pain and repeatedly vomitted before he was found unconscious on Wednesday, September 18, in Room 209 in Mayo Hall Annex inside the PMA.

Dickson said they were verifying a report that the victim was electrocuted.

At least three persons of interest, two cadets from the Third Class and another from the First Class, are now under the restrictive custody of the PMA.

Malacañang vowed that justice will be served for Dormitorio.

Cabinet Secretary Karlo Nograles said President Rodrigo Duterte's administration would punish those involved in the hazing incident, as it does not tolerate any unlawful acts.

(We know that we have the Anti-Hazing Law. If there is really a hazing incident, the law clearly gives punishment for that. And under President Duterte's administration, the perpetrators need to be held accountable.)

"So kahit sino pa man 'yan, [hindi sila makakaligtas]. We do not condone itong mga illegal na gawain, yung mga unlawful activities, at ang hazing is one of those things na this administration does not condone," Nograles added.

(So whoever are they, they will not be exempt from punishment. We do not condone illegal acts, unlawful activities, and hazing is one of those things that this administration does not condone.)

Republic Act (RA) 11052, signed by Duterte on June 23, 2018, prohibits all forms of hazing in fraternities, sororities, and organizations in schools, including citizens, military and citizens' army training.

It imposes a penalty of reclusion perpetua and a fine of P2 million on individuals behind hazing rites that may result in the death, rape, sodomy, or mutilation of a prospective member.

Nograles vowed that there would be "equal" implementation of the anti-hazing law.

"So kung ano man ang magiging investigation or outcome ng investigation at kung ito ba ay aakyat sa korte at mapo-prosecute (So whatever the outcome of the investigation will be, and if it will be heard by the court and those behind the hazing will be prosecuted), then, it will have to go through the full process of the law," Nograles added. (SunStar Philippines)