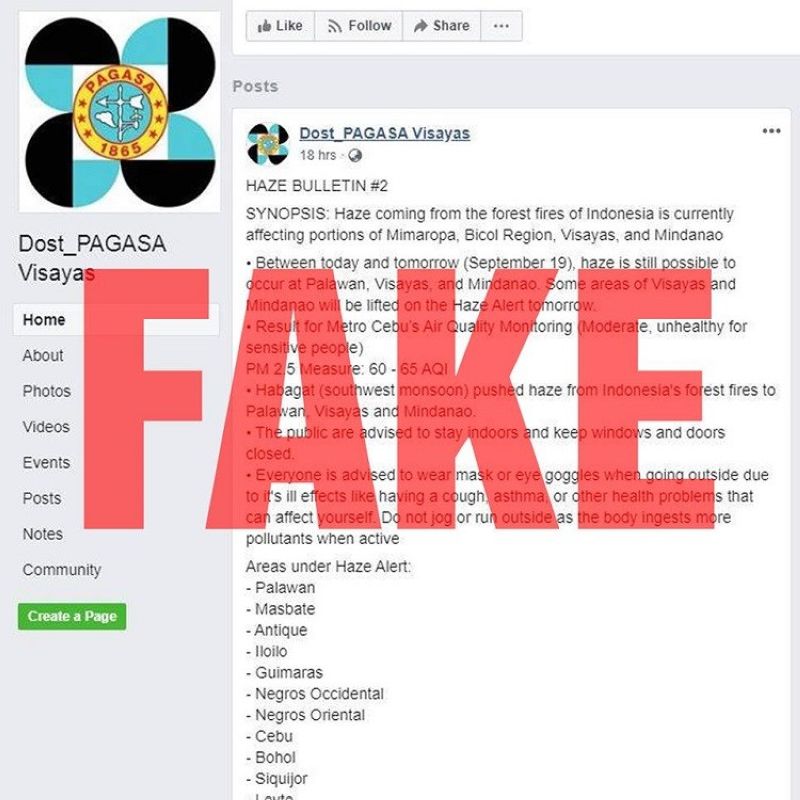 Pagasa has warned the public of a Facebook page bearing the name "Dost_PAGASA Visayas," which posted a fake "haze bulletin" in light of the hazy weather condition Metro Cebu is currently experiencing.

THE state weather bureau has warned the public of a Facebook page bearing the name "Dost_PAGASA Visayas," which posted a fake "haze bulletin" in light of the hazy weather condition Metro Cebu is currently experiencing.

According to the fake bulletin, the haze alert will be lifted in some areas of the Visayas and Mindanao.

It advised the public to stay indoors and to close all doors and windows. The public was also warned to wear masks and eye goggles for protection.

"Pagasa would like to inform the public that the aforementioned page is NOT an official social media account of the agency. Furthermore, the agency has not issued any 'Haze Bulletin,'" Pagasa said.

It added that all official bulletins coming from its Central Office and Regional Services divisions are posted online through the following official accounts:

Air quality testing is under the jurisdiction of the Department of Environment and Natural Resources (DENR) while weather bulletins are posted by Pagasa.

The haze that covered parts of Cebu was earlier reported to have reached "unhealthy" levels, exposing the elderly, the sick and young children to health risks.

Department of Health Central Visayas Regional Director Jaime Bernadas said that the public need not be alarmed with the haze that hit Metro Cebu.

However, Bernadas still encouraged the public to wear masks and other protective gear.

The hazy weather condition is caused by the forest fire in Indonesia, as confirmed by the Environmental Management Bureau Central Visayas. (SunStar Cebu)