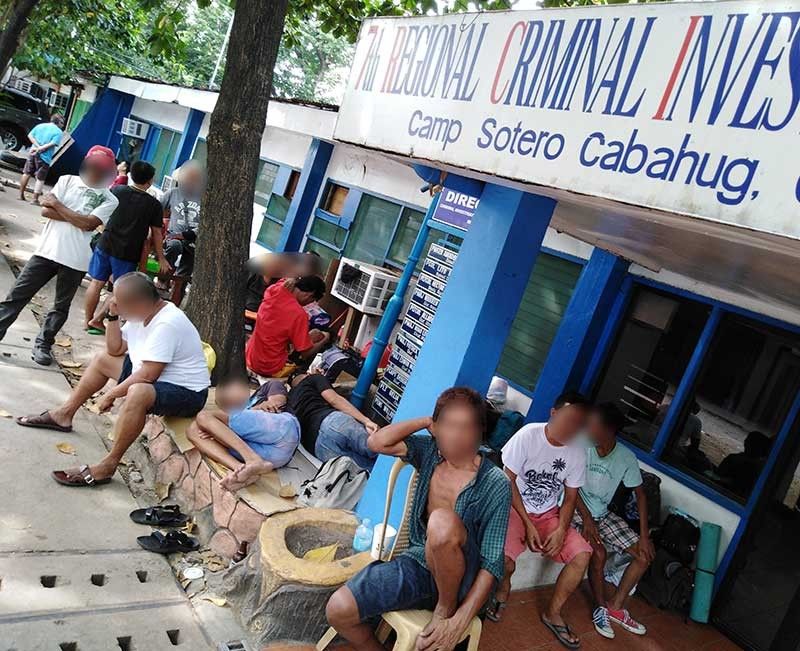 CEBU. Some of the freed convicts who have surrendered in Cebu wait for their transport to the Leyte Regional Prison in Abuyog, Leyte. (Photo by Amper Campaña)

INTERIOR and Local Government Secretary Eduardo Año clarified that the manhunt for freed heinous crime convicts who have not surrendered has not been suspended.

Año said the police will resume operations as soon as they get from the Department of Justice the revised list of persons deprived of liberty (PDLs) who were released before the end of their prison terms based on good conduct time allowance (GCTA).

He said he has asked the DOJ to validate the list and release the revised list within Friday, September 20, 2019.

A list provided by the Bureau of Corrections (BuCor) showed that 1,914 heinous crime convicts were released from October 2014 to August 13, 2019.

But Año said over 2,000 convicts have surrendered by the end of the 15-day deadline given by President Rodrigo Duterte.

"But because of this development sabi ko you have to validate the list within today. (Ang sabi ko) i-cleanse ninyo at ibigay sa amin ang validated list. I gave instruction to the PNP that we will wait for the list within the day and go on with the manhunt,” he added.

Freed PDLs were given until 12 midnight Thursday, September 19, 2019, to turn themselves in. Starting Friday, a P1-million bounty is offered on each convict, dead or alive.

National Capital Region Police Office (NCRPO) Director Guillermo Eleazar said that based on the order of the Directorate for Operations, they will resume the manhunt.

The PNP has formed 121 tracker teams led by the Criminal Investigation and Detection Group (CIDG) to conduct the manhunt based on the list that will be provided by the DOJ.

DOJ spokesperson Markk Perete said they were expediting the process in order to provide the PNP as well as the Armed Forces of the Philippines the cleaned-up list as soon as possible.

He said the list may include only at least 600 convicts.

Perete cited the case of murder convict Rolito Go who was included in the list.

“Upon review of his case, the Supreme Court ordered his release so therefore he should not be on the list of prematurely released heinous crime convicts,” he said.

In another interview, Justice Secretary Menardo Guevarra said Go, who was convicted in the killing of De La Salle University student Eldon Maguan in a road rage incident in 1991, was released in 2016 after fully serving his sentence.

PNP deputy spokesperson Lieutenant Colonel Kimberly Molitas said Go is a beneficiary of the older law which cuts down a convict's sentence based on good behavior and not the expanded GCTA, which excludes the heinous crime convicts from coverage.

She said those charged with heinous crimes and who were detained after 2013 will no longer earn any GCTA credits, according to the revised implementing rules of RA 10592.

Go was sentenced to be imprisoned until 2022 but an SC decision said his imprisonment should have expired in 2013 upon the deduction of time allowances for good conduct, colonist status and preventive imprisonment.

"Therefore, after crediting his preventive imprisonment of nine months and 16 days, and the regular Good Conduct Time Allowance (GCTA) under Act No. 3815 and Special Credit Time Allowance (SCTA) under Act. No. 2409 granted upon him, Go has completed serving his sentence of thirty (30) years on 21 August 2013, which he commenced to serve on 30 April 1996," the SC decision reads.

Duterte ordered the recall of the freed PDLs after the public outcry over the allegedly anomalous early release of heinous crime convicts. (SunStar Philippines)