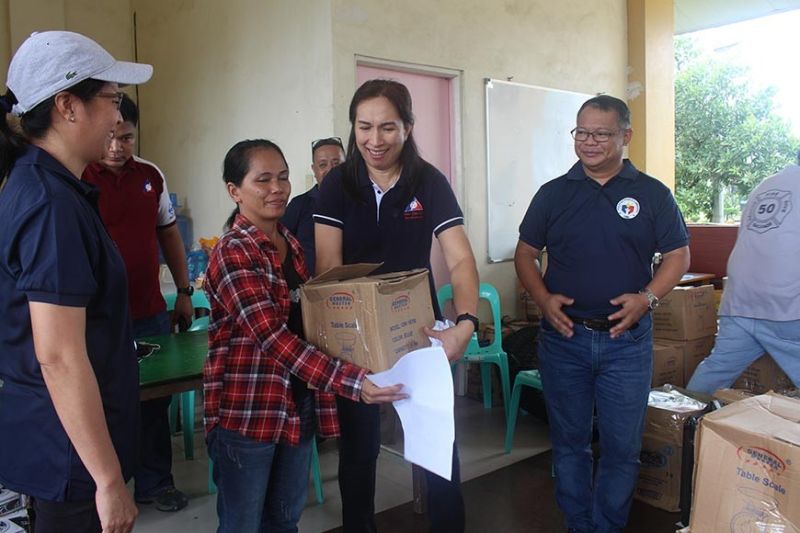 PAMPANGA. Department of Labor and Employment regional director Zenaida Angara-Campita hands over livelihood assistance to a Hanjin worker on September 19 during the turnover of P2.125 million worth of livelihood package at Hanjin Village, Castillejos, Zambales. (Contributed photo)

CITY OF SAN FERNANDO -- Department of Labor and Employment (Dole) extended livelihood assistance to some 111 Hanjin workers and their dependents on Thursday, September 19. The turnover of a total of P2.125 million worth of livelihood package was held at Hanjin Village, Castillejos where most of the beneficiaries reside.

Regional director Zenaida Angara-Campita reported to Labor Secretary Silvestre Bello III that this initiative is part of the department’s continuous intervention on the impact of Hanjin’s closure to its employees, their families, and nearby communities. Prior to the livelihood distribution, a Jobs Jobs Jobs caravan was held on February 9 where over 25,000 jobs were handed available by 103 participating companies.

“Kami sa Dole ang magiging witness kung paano ninyo pagsisikapang paunlarin ang ibinigay na ayuda sa inyo (We in the department will be witnesses of how you will grow the livelihood assistance given to you),” Campita-Angara said in her message.

Under the Dole Integrated Livelihood Program (DILP), the beneficiaries were free to choose the type of livelihood package as long as it meets the requirement of the program. Sari-sari store package, welding kit, and carinderia supplies are some of the affected workers’ chosen livelihood aid.

During the program/orientation, Angara-Campita was joined by Reynante Lugtu, Chief Labor and Employment Officer of DOLE Zambales, Eleanor Dominguez, mayor of Castillejos, and Bernardo Tiong, PESO manager and administrator.

Earlier this year, Hanjin Heavy Industries and Construction Philippines (HHIC Phils.), a shipbuilding giant in Subic, filed for corporate rehabilitation as it faces insolvency. The company laid off more than 7,000 in 2018 and another 3,800 during the first quarter of 2019. (PR)