Officials: Pork in City of San Fernando is safe to eat 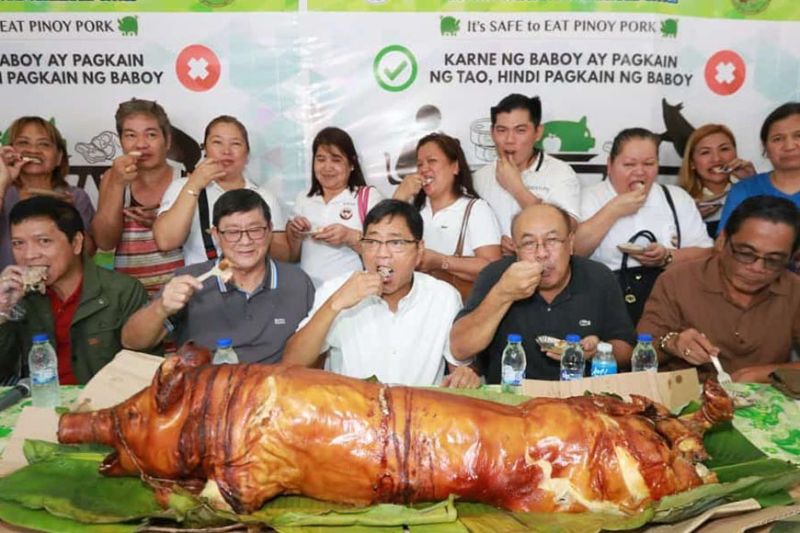 PAMPANGA. Mayor Edwin Santiago together with officials of the Department of Agriculture, City Health Office, meat vendors groups and consumers show that pork is safe to eat during the boodle fight on Friday, September 20, 2019, at the New Public Market in the City of San Fernando. (Chris Navarro)

THE local government of the City of San Fernando, together with meat vendors and other stakeholders, gathered Friday, September 20, for a boodle fight at the new public market to show that pork meat coming from the city is safe for human consumption amid the African Swine Fever (ASF) scare in the country.

Mayor Edwin Santiago personally joined the boodle fight where various kinds of pork dishes, including lechon, prepared by market vendors were served to officials and consumers.

During the press conference held before the event, Department of Agriculture assistant regional director for research Dr. Eduardo Lapuz reiterated that the ASF is only infectious among hogs, and is not transferable to humans.

“Consumers must not be worried because the pork meat is still safe for consumption because the virus is not transferable to humans. Our only reminder is to clean and cook the meat properly as a precaution,” he said.

The real danger, Lapuz said, is when a pig infected with ASF is killed or traveled around the city or the whole of the province as it may infect other swine and pose threat to the hog raising industry in the area.

“That is why the Provincial Government of Pampanga has ordered the total ban on entry of pigs in the province to ensure that our hog raisers will not be affected by ASF,” he added.

Meanwhile, Santiago asserted that the city government imposes strict biosecurity measures to ensure that commercial and backyard hogs in the city will not be infected by the ASF virus.

He added that meat being sold in public markets around the city passed through meticulous inspection before and after they are butchered in the city’s National Meat Inspection Service-accredited slaughterhouse.

“Even prior to the entry ASF to the Philippines, all the hogs coming from the city are butchered in the slaughterhouse that is operated based on the highest level of standards to ensure that they are clean and safe for consumption,” Santiago said.

In this capital city alone, there are two registered commercial hog farms and dozens of backyard raisers who regularly supply the meat demand around and even outside the city, according to City Agriculture and Veterinary Officer Cristina Sangumay.

Sangumay noted that all the hog farms in the city, as well as rivers and other waterways, are being closely-monitored to immediately account those that may be infected or show symptoms of ASF, if any.

“Currently, our only measure is to strictly monitor the farms and implement biosecurity actions to ensure that the virus will not reach our city. The city government is also ready to provide assistance to the hog raisers if needed,” she said.