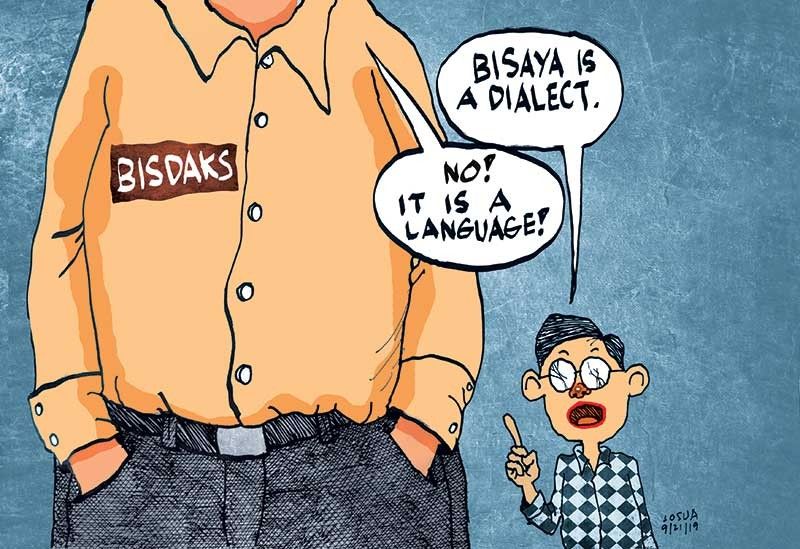 THE Department of Education needs to set things right.

Up to now, there are many Filipinos out there who still don’t know the difference between language and dialect.

Early on, they are taught in school that there is one umbrella language, “Pilipino,” and everything else spoken in this more than 7,000-island archipelago is a dialect of that.

According to Ethnologue, an annual reference publication in print and online that provides statistics and other information on living languages in the world, the country has 182 native languages in total.

That means, 181 languages have been downgraded and given derivative status.

But first, let’s look at how the Oxford Dictionary defines language and dialect, shall we?

Language, it says, is a mass noun that describes “the method of human communication, either spoken or written, consisting of the use of words in a structured and conventional way.”

Using that definition, Tagalog can be considered the predominant language spoken in the National Capital Region and the southern Tagalog provinces. By the way, so is Bisaya/Cebuano, which is the lingua franca in Central Visayas and parts of Eastern Visayas as well as most of Christian Mindanao.

What is a dialect then? And why are seemingly intelligent people here in the Philippines continuing to interchange the two?

The Oxford Dictionary defines dialect as “a particular form of a language which is peculiar to a specific region or social group.” To put it simply, a dialect is a variety of a language.

Its intonation may vary from one place to another, but its speakers can still understand each other unless, of course, they’re from Quebec and the people in France will swear they speak a different language.

A Bisaya who goes to Manila will draw blank looks unless the person he or she is talking to is a fellow Bisaya because there they speak Tagalog, another language.

Now, that wasn’t so difficult, was it?