415 Naga families back in ‘no habitation’ areas 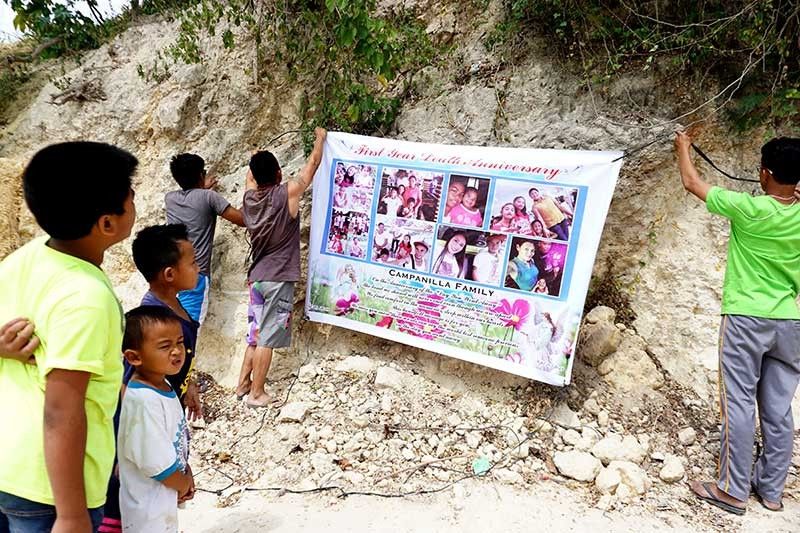 AS IF THIS LESSON WASN’T PAINFUL ENOUGH: The Campanilla family hangs a tarpaulin at Ground Zero in Sitio Sindulan, Brgy. Tina-an, City of Naga, Cebu to remember the 16 family members they lost in the Sept. 20, 2018 landslide. A year later, more than 400 families are back in Naga’s “no habitation” zones. (Photo by Alex Badayos)

AFTER a year of relief and rehabilitation efforts, the City Government of Naga in Cebu now worries about some 400 families who returned to their homes in “no habitation zones” close to the landslide that hit Sitio Sindulan in Barangay Tina-an one year ago.

Acting City of Naga Mayor Kristine Vanessa Chiong said the 415 families that are living in some sitios in four barangays that were identified by the Mines and Geosciences Bureau (MGB) 7 as “no habitation zones” are being convinced to transfer to identified relocation areas in the city.

The “no habitation zones” are areas around Ground Zero in Sitios Sindulan and Tagaytay where the landslide occurred and where geohazards were found by MGB 7.

With the ongoing hazard reduction program being implemented by Cemex Philippines, there is still the risk of another landslide near the “no habitation zones.”

Chiong admitted that they cannot force the families to relocate, especially since the City doesn’t have the resources to provide all of them with houses.

“We explained to them that the ‘no habitation zone’ is still in effect, especially that the hazard reduction works are ongoing and the rains have started. We have been sending out advisories to inform the people,” she added.

Some of the 415 families were already given cash assistance by the City last year but chose to return to their homes while an updated delineation of danger zones is being prepared by MGB.

In a related development, more than 400 inmates of the City of Naga Jail remain at the old female dorm of the Cebu City Jail in Barangay Kalunasan, Cebu City as slope stabilization activities near the Naga jail continue.

Jail Senior Insp. Roberto Crisanto Alpon, City of Naga jail warden, said they are still waiting for advice on when the slope stabilization activities will be finished.

Alpon said that for 10 months now, the inmates have had to deal with the congestion at the Cebu City Jail. They also don’t get visited by their families as often because of the distance of the Cebu City Jail from Naga.

He said, though, that the City Government of Naga has been providing the families with transportation to visit the inmates.

On the first anniversary of the landslide, survivors who were at Ground Zero on Friday to remember their loved ones recalled how the hill in Sitio Sindulan came crashing down, burying their houses and their relatives and neighbors alive.

Isaias Macalinao, 58, a resident of Sitio Upper Sindulan, was working as a traffic aide at the highway when the landslide occurred.

He rushed back to the house and found his wife and daughter safe as they were able to run.

But his happiness was short-lived. He later learned that six of his relatives, including his nieces and nephews, were buried under the rubble.

As he offered prayers, flowers and candles for his dead relatives, Macalinao said he had slowly moved on from the tragedy.

“I still feel jitters whenever I remember what happened last year. I thought that such incidents could only happen in the movies or on TV. But for us, it was the real thing. It was hard to believe, but it happened. I’m slowly accepting it, but there are times that it is too painful to remember,” Macalinao said in Cebuano. (JKV)