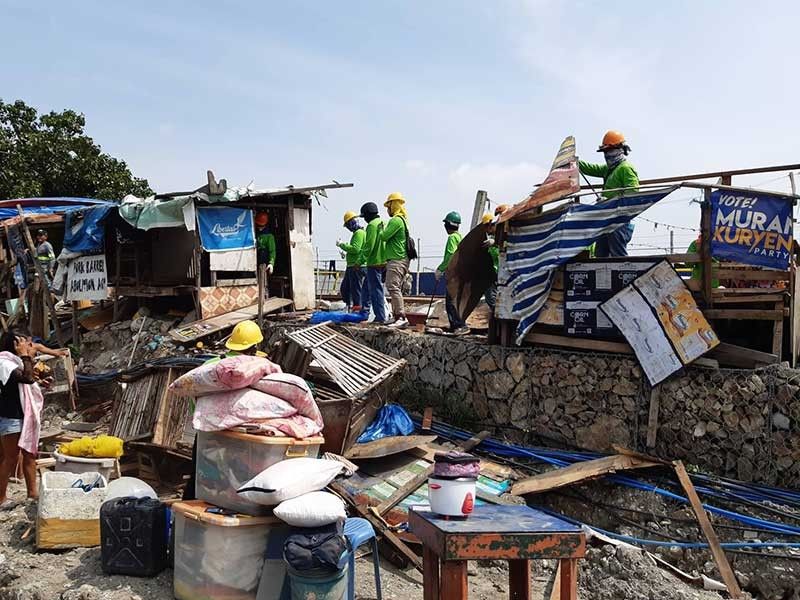 THE cities of Mandaue and Cebu have started removing obstructions along Mahiga Creek in a move to prevent flooding and following the joint cleanup led by their mayors.

On Sept. 14, 2019, Mandaue City Mayor Jonas Cortes and Cebu City Mayor Edgardo Labella led the cleanup where they saw the need to remove obstructions to prevent flooding in the two cities.

Mahiga Creek sits at the boundary of the two cities, specifically Barangays Subangdaku in Mandaue and Mabolo in Cebu City.

The demolition of illegal structures on the Mandaue City side started Friday morning, Sept. 20.

Some 2,000 individuals lost their homes along Mahiga Creek, as the deadline set by President Rodrigo Duterte for authorities to clear obstructions expires at the end of September.

Mandaue City Housing and Urban Development Office (Hudo) elements started demolishing 54 structures mostly made of wood and nipa. The demolition was orderly as residents only watched; some of them cried. Others resigned themselves to the City’s action and helped in the removal of structures.

Cesar Ylanan, Hudo demolition team head, said it took the City seven years to finally remove the occupants. Several attempts were made; some even were compensated for their relocation, but occupants returned.

Ylanan explained they were merely implementing orders of President Duterte for local authorities to clear public areas of obstructions and the removal of structures along Mahiga Creek was done to allow the Department of Public Works and Highways to proceed with a slope protection project that would also ensure the smooth flow of water and prevent flooding.

Mayor Cortes had announced to residents the demolition of their homes because these are illegal and it is dangerous for them to remain in the area.

But residents complained that the relocation site offered them was prone to flooding.

Also during the cleanup drive last Sept. 14, those living near the creek in Cebu City’s side were found to have no sewage. Owners of 120 houses then promised to put up a septic tank so their waste would not go directly to the creek.

Lawyer Jigo Dacua, Cebu City Environment and Natural Resources Office head, said the promise was made by residents of Barangays Banilad, Kasambagan and Mabolo who went to his office after they were issued citation tickets for violating the Septage Law that requires that they have a septic tank.

These residents promised that they would have the septic tank within 45 days from Friday.

Dacua also reminded those living within the three-meter easement along Mahiga creek to move their structures back as these are illegal. He is working with the Division for the Welfare of the Urban Poor for housing options for the residents.

Dacua said the City will not demolish structures if there is no relocation site for them. (ANV, PAC)