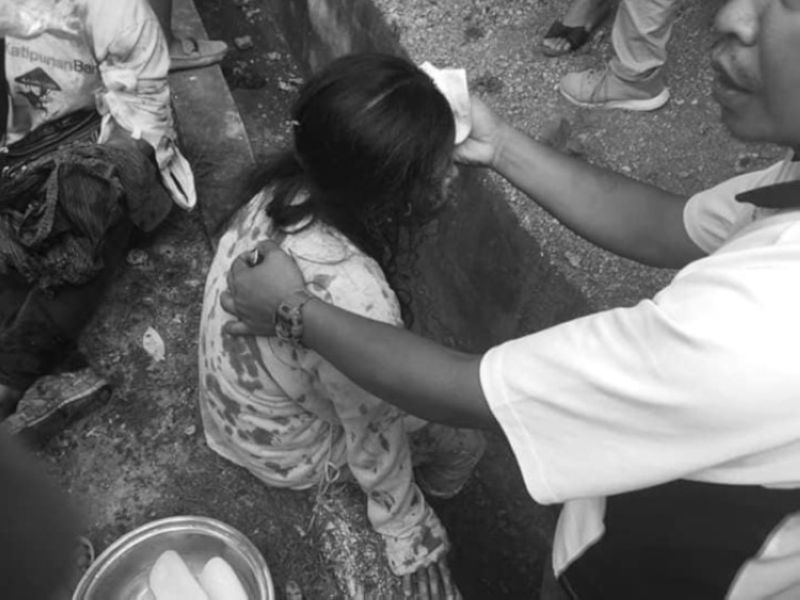 ARGAO ACCIDENT. A member of the Argao Municipal Disaster Risk Reduction and Management Office gives medical aid to one of the injured passengers of a vehicle accident on the highway in Barangay Taloot on Saturday morning, Sept. 21, 2019. (Contributed Photo)

A MULTICAB carrying 14 passengers met an accident on the highway in Sitio Upper, Barangay Taloot in the southern town of Argao, Cebu on Saturday morning, Sept. 21, 2019.

According to Corporal Ariel Conde, traffic investigator at the Argao Police Station, driver Bernabe Aballe, 46, lost control of the vehicle after its brakes malfunctioned.

The incident happened past 8 a.m.

The 11 other passengers who sustained minor injuries were allowed to go home after receiving medical treatment.

“Kinse tanan ang sakay ato, sir, including sa driver nya ang driver ug ang iyang tulo ka pasahero nga na grabehan dalhon to sa siyudad (All in all, there were 15 persons in the multicab, including the driver. The driver and the three other passengers who were seriously hurt will be transferred to a hospital in the city),” Conde said.

The group had just come from the mountain barangays of Botong and Bayabas. They were on their way to attend the anniversary of a micro finance corporation in the neighboring town of Sibonga.

Abella told police that when they reached a curve in Sitio Upper, the brakes stopped working. The vehicle crashed when he couldn’t control the wheel.

Conde said the multicab was not overloaded and it was running on normal speed.

Kent Rizon of the Argao Municipal Disaster Risk Reduction and Management Office (MDRRMO), though, received information that the multicab had been seen speeding in Barangay Colawin. But passengers don’t plan to file a complaint against Aballe, the owner of the multicab, since they all know each other and they’re neighbors.

Aside from passengers, the multicab was also carrying vegetables that the group planned to put on display at the gym during the celebration.

The victims said the ambulance of the MDRRMO was quick to arrive at the scene. (from AYB of Superbalita/PJB)