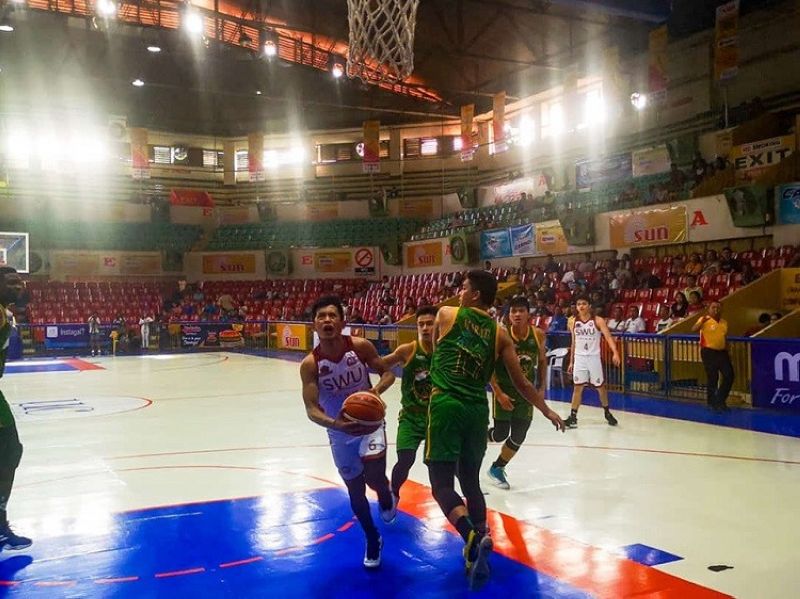 SWU-Phinma's Shaquille Imperial scored the basket that gave the Cobras the lead for good with just seven seconds remaining in the game. (Photo by Jonas Panerio)

THE Southwestern University (SWU)-Phinma Cobras made it three wins in a row after they edged the University of San Carlos (USC) Warriors, 62-59, in the 2019 Cesafi men’s basketball tournament at the Cebu Coliseum on Saturday, September 21, 2019.

Veteran guard Shaquille Imperial donned the hero’s cape for the Cobras as he snuck in to grab an offensive rebound off a missed three-pointer by Dyll Roncal and put it back in to give SWU-Phinma a 60-59 lead with 7.8 seconds remaining.

Then, after USC’s Roosvelt Jelianggao missed a layup off his drive along the baseline, SWU-Phinma guard William Polican was fouled and promptly made two free-throws to raise the Cobras’ lead to three, 62-59 with two seconds remaining.

With the Warriors having no more timeouts, they were forced to throw the inbound pass from the other end of the floor, with Jelianggao failing to get off a good shot as time expired.

Senegalese Lamine Thiam carried the Cobras’ offense as he scored 24 points on top of 10 rebounds, three assists and three steals while Dyll Roncal and Red Cachuela added 10 markers apiece. Imperial, who has had a rough start to the season, after sizzling in the preseason, managed seven points, four rebounds, two assists and a steal.

USC dropped to 3-2 after the loss. Kurt Trangia led the team with 18 points, all of which came in the first half. Magic Marata had 11 markers, eight coming in the penultimate period. (SunStar Cebu)