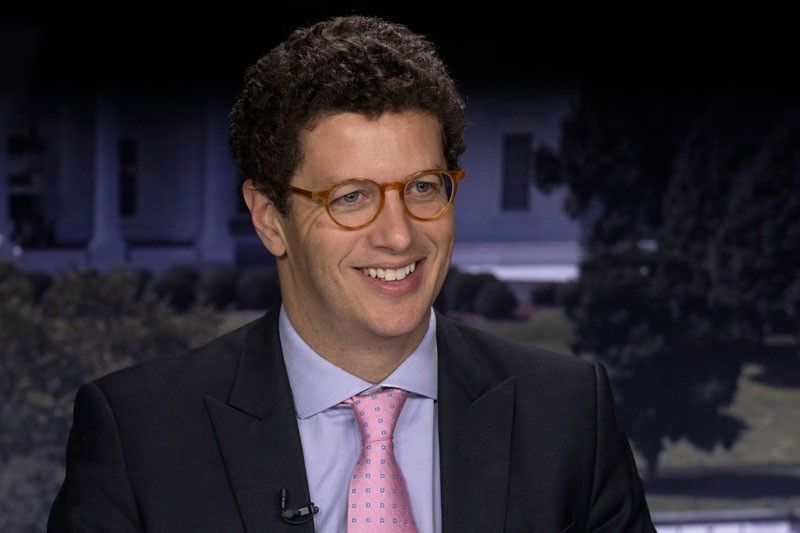 WASHINGTON. Brazil's Minister of the Environment Ricardo Salles smiles for a photo during an interview with The Associated Press in Washington, Friday, September 20, 2019. After facing international criticism for steeply rising rates of deforestation in the Amazon, Salles is visiting the U.S., France, Germany, and the United Kingdom to insist that there’s no big problem. (AP)

WASHINGTON -- In July, Brazilian President Jair Bolsonaro dismissed global concerns about fires raging in the world's largest rainforest, saying "The Amazon is Brazil's, not yours." Now, the far-right president's government has a new message: Everything's fine, and the rainforest is open for private investment.

After facing international criticism for steeply rising deforestation in the Amazon, Brazil's minister of the environment, Ricardo Salles, is visiting the U.S., France, Germany, and the U.K. to insist that there's no big problem.

"We're doing a great job with the enforcement of the laws," he told The Associated Press in an interview in Washington.

Brazil has strict environmental laws on the books, but enforcement budgets and campaigns were slashed after Bolsonaro took office this year. Sometimes called "the Tropical Trump," Bolsonaro dubbed environmental enforcement an impediment to economic growth during his election campaign.

Salles said another purpose of his trip was to promote what he called "a bio-economy agenda." He said Brazil was inviting investment from global pharmaceutical companies, cosmetic-makers and other industries to develop methods to harvest plant-based materials from standing forests to produce makeup, oils, chemicals, and other goods.

Salles, a lawyer, said that to protect the Amazon, Brazil needs stronger laws and procedures to guard intellectual property rights for companies developing industries that will extract resources from, but not level, forests. Within six months, the government will launch a new Amazon fund to attract investment from the private sector, he said.

"We need to give the financial and tax incentives," he said. "The private sector needs to be involved in this effort in developing products and supply chains related to the bio-economy. It can generate jobs, opportunities and income, and then it's the main source of revenue to keep the forest preserves."

Carlos Rittl, a tropical biologist and the executive secretary of the Brazilian Climate Observatory, a coalition of civil society groups in Sao Paulo, questioned the rationale and sincerity behind this approach.

"How can we be sure that the nice word of 'bio-economy' is compatible with sustainable development?" he said. "There is nothing sustainable so far about what this government has done in terms of policies and actions related to the Amazon."

Satellite data from the Brazilian Space Agency has shown a sharp increase in deforestation and forest fires over the past year. In August, the space agency issued an alert that fires in the Amazon had increased 84 percent in the first seven months of this year, compared with the same period in 2018.

Salles quibbled about the satellite maps, saying that cloud cover could obscure readings. "They couldn't see due to the clouds, because the Amazon has a lot of clouds," he said.

However, scientists said that the data is reliable and that Brazil's space agency is one of the most respected in the world.

"The problem is very severe. There are almost zero natural fires in the Amazon," said Carlos Nobre, a climate scientist at the University of Sao Paulo. "The fires happen because people are deliberately lighting fires to clear land for new cropland or cattle pasture."

Facing global scrutiny over deforestation, the government has in the last month launched a new crackdown effort. "We have an unprecedented mobilization of the federal forces at this moment, from the past almost 30 days" to curb illegal deforestation, said Salles.

Observers wonder whether the intention is to safeguard the rainforest or generate positive publicity.

"They changed their political speech, but only because of the global outcry," said Nobre. "It doesn't necessarily match the facts on the ground."

Next week, Bolsonaro is expected to speak at the U.N. Climate Action Summit in New York. Salles said that the president's remarks will aim to "present the reality of the Brazilian environmental situation, which is very sustainable."

The Brazilian Climate Observatory's Rittl said that looking for ways to boost agriculture that is compatible with preserving the forests is an idea with merit. The harvesting of Brazil nuts, for example, has provided work and income in standing rainforests.

But he is wary of the government's current rhetoric around a "bio-economy."

"The idea of a bio-economy will only work for the Amazon region if it respects not only environmental laws, but also local cultural needs and indigenous knowledge," said Rittl.

"Fostering private investment while weakening environmental enforcement and withdrawing indigenous people's rights over their land won't work out well for the Amazon and the Amazonians."

Salles said he supported the role of youth activism. "My children are also concerned," he said. (AP)