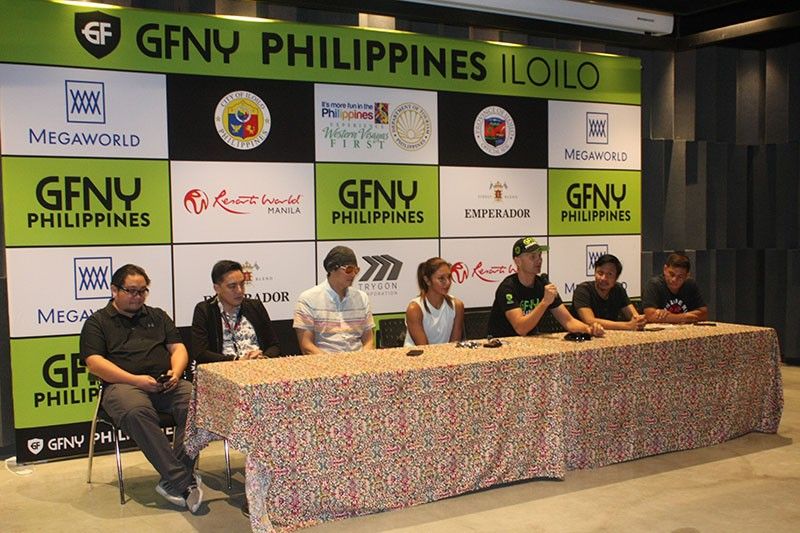 ILOILO. GFNY co-founder and CEO Uli Fluhme is making sure that all GFNY events are true granfondos in the Italian tradition: you get to have the right of way at each intersection, will be timed start to finish and your result will be based on your time. Fluhme during the press conference, Friday, September 20, in Iloilo to witness the GFNY Asia Championship on Sunday, September 22, 2019. (Photo by Leo Solinap)

ILOILO is now ready and set to host the Grand Fondo New York (GFYN) Asia Championship, the second edition of GFNY Philippines on Sunday, September 22, a contested race among Asia’s elite and international riders to see who will be crowned GFNY Asia Champion.

GFNY, the world’s largest cycling marathon event, features a total of 18 world races in the 2019-2020 calendar race seasons. They include the GFNY World Championship in NYC and five regional championships in Asia, Europe, North America, South America, and the Middle East – Africa.

This year’s Asia championship is in Iloilo. Over 300 participants from 15 Asian nations are set to conquer the streets of Iloilo province and city which will start Sunday, September 22, at Megaworld’s Iloilo Business Park in Mandurriao.

The 72-hectare township has been named as the official venue of the Philippine leg of the GFNY, with Festive Walk Mall hosting the majority of the events.

The official race will kick off 6:30 a.m. Sunday, September 22, at Festive Walk Mall.

According to the organizers, GFNY riders can expect closed roads in some parts of Iloilo province or police-moderated traffic with right of way at all intersections during the race.

The awarding of winners will be held at 1 p.m., while courses officially close at 3:30 p.m.

GFNY Philippines is a timed race. Each athlete has their timing chip, which starts right after they cross the starting line and stops when they cross the finish line. Timing results for all riders will be provided at the finish area on race day and online after the race.

Only the finishers of the 133 kilometer long course are eligible for category rankings and Overall and Podium awards. If the riders want to race and be ranked in this category, they must complete the long course. Top 10 percent of finishers in each age group qualify for the Racer Corral at every GFNY World event.

The riders on the 63 kilometer medium course will be provided their start-to-finish time, but will not be ranked by finish time. All finish times will be listed in alphabetical order.

Every GFNY Philippines finisher receives a medal, no matter which distance they completed. All finishers also earn a “Finish” towards their 3 x 2019 GFNY medal or the 10x medal.

As for perks for those completing the race, they will receive the official race jersey, goodie bag, chip timing, full course support, post-race meal, podium awards, and the finisher medal.

The 326-room Courtyard by Marriott and the 151-room Richmond Hotel Iloilo, both located in the Iloilo Business Park, serve as the official hotel and address of the participating cyclists.

Aside from the Philippines, other elite racers competing in this leg include those from Korea, Japan, Singapore, Malaysia, Indonesia, Israel, USA, Germany, Colombia, and Brazil.

The qualifying race is one of the five continental title series that form part of the 2019-2020 GFNY World Race season. The overall male and female winners of this leg will earn a ticket to compete in the Campagnolo GFNY World Championship 2020 to be hosted in New York City in May next year.

The 10th annual Campagnolo GFNY World Championship New York will be held on May 17, 2020. The race features an international peloton with riders from over 90 countries.

Athletes take on a challenging 100-mile route from New York City, to Bear Mountain, to Fort Lee to compete against each other, the clock, and themselves in a personal endurance challenge.

The next GFNY race after the Philippines will be in Ecuador, Panama, Argentina, Chile, and Cozumel, Mexico this year. It will be followed by Bali, Monterrey, Uruguay, Colombia, Dominican Republic, Jerusalem, Italy, and New York in May 2020.

The last GFNY race in the Philippines was held in Bohol on January 27, 2019.