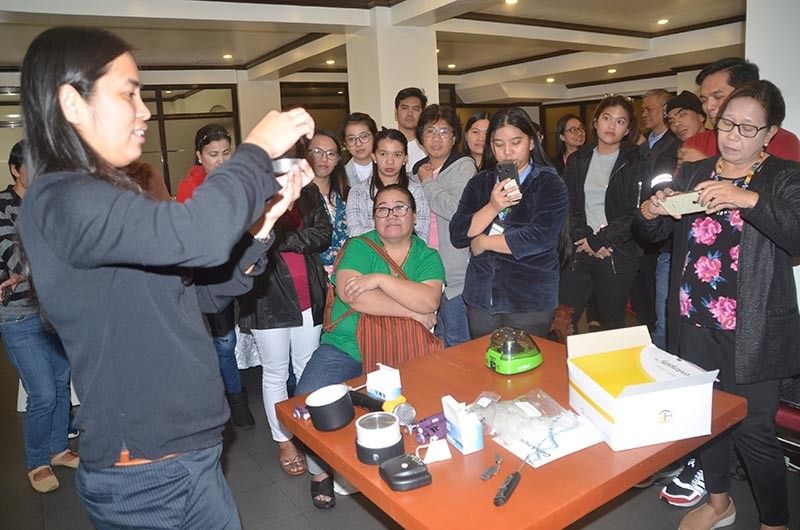 BAGUIO. Maria Jowina Galarion presents the Biotek-M Dengue Aqua Kit developed by the University of the Philippines Manila Science Institute of Health in partnership with Department of Science and Technology (DOST) to representatives of hospitals and health diagnostic centers in Baguio. The kit which uses molecular analysis offers a faster and more affordable laboratory diagnostic of the dengue virus. The dengue aqua kit was one of the disaster risk reduction and management-related technologies presented by DOST in their Techno Promo Day. (Photo by Lito Dar)

SEVENTEEN people have died of dengue fever from January to September this year, according to the Department of Health (DOH)-Cordillera Administrative Region (DAR).

In the weekly Talakayan sa Environment Code radio forum of the Baguio Regreening Movement (BRM), Karen Lonogan, senior health program officer of DOH-CAR, said Cordillera recorded a total of 6,203 dengue cases as of September 7, 16 percent higher than the number of cases in the same period in 2018.

Of the 17 deaths recorded, six were from Benguet, five came from Baguio City, three from non-CAR area, two from Mountain Province and one from Kalinga.

“What is good here is that the local government units (lguS) in our region are now very active with regards to the control and prevention of dengue. Their anti-dengue task forces in their barangays have been activated which helps in the decrease in cases,” the health program officer stated.

“Before the opening of classes or during the yearly Brigada Eskwela, DOH coordinated with the LGU’s and the Department of Education so that prior to the start of classes, the parents are informed on what to do to protect the students and teachers. The action undertaken here was the lectures advocacy with regards to the control and preventive measures which are focused on the parents on how they should monitor their children aside from the temporary suspension of the wearing of skirts for students in schools,” Lonogan added.