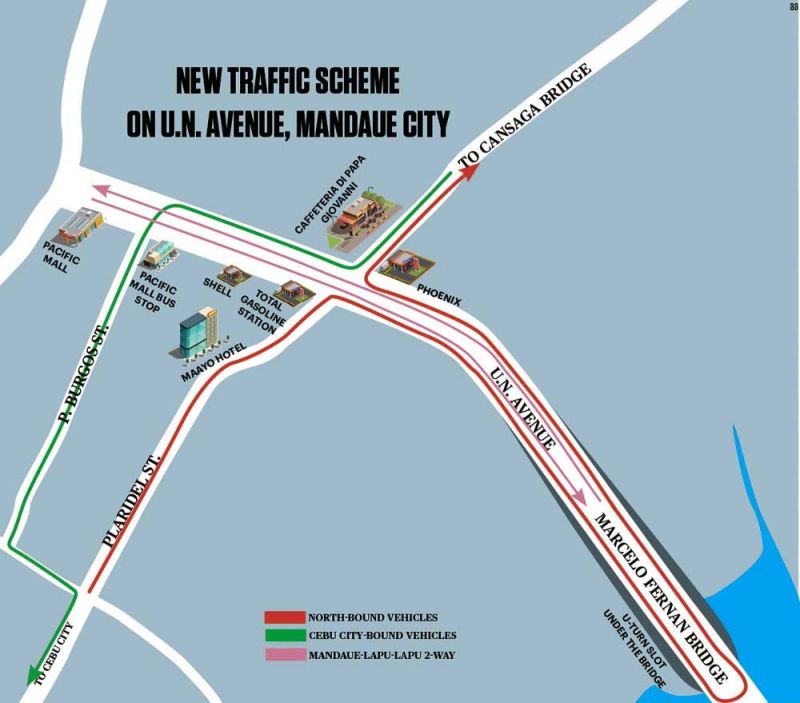 REROUTING. Under the new traffic scheme, motorists on D.M. Cortes St. will have to take a longer route to get to the Cansaga Bridge, and vice versa, as they will no longer be allowed to cross the intersection at UN Ave. (SunStar graphics / Josua S. Cabrera & Enrico P. Santisas)

It’s the second day of the dry run of the new traffic scheme that the Traffic Enforcement Agency of Mandaue (Team) implemented on Sunday, Sept. 22 to decongest the busy intersection of UN Ave. and D.M. Cortes St.

Asked for an assessment of the dry run’s first day, Team said it was too early to say.

Traffic, though, was heavier than usual on Sunday, with some motorists posting their frustration and anger on social media.

Mario Gacko, Team traffic operations head, said the full effect of the new traffic scheme will be felt on Monday when people go back to work and students go back to school.

Under the new scheme, motorists traveling to northern Cebu from D.M. Cortes St. via the Cansaga Bridge will take the U-turn slot under the Marcelo Fernan Bridge.

When motorists return to the main road, they can just turn right to the Cansaga Bridge, instead of crossing the intersection.

Taking the U-turn slot under the second bridge is a scheme that has been followed by drivers of public utility jeepneys heading north via the Jagobiao-Consolacion route.

Buses and other northbound vehicles coming from the Cebu North Bus Terminal also take the U-turn slot instead of turning left toward Pacific Mall.

The purpose of the new traffic intervention is to prioritize motorists coming from the airport.

Based on Team’s records, 28.377 vehicles ply UN Ave. from the Marcelo B. Fernan Bridge every day

Gacko foresees traffic on the Cebu North Road in Barangay Basak to be bad, especially since many trucks use the highway.

But despite his dire prediction, Team will continue with the rerouting. It’s the only way they’ll know if the new traffic scheme is effective, Gacko said.

He said the traffic offices of Mandaue, Cebu City, Lapu-Lapu City and Consolacion will coordinate to come up with a comprehensive traffic plan to address the metro gridlock.

Gacko said they might have to make some changes with the new traffic scheme in the next few days, depending on how it would affect the traffic situation in the city.

He urged students and workers to leave their houses early on Monday to avoid being late.

The first day of the dry run on Sunday drew mixed reactions from motorists. The following are taken from Superbalita Cebu’s Facebook page: