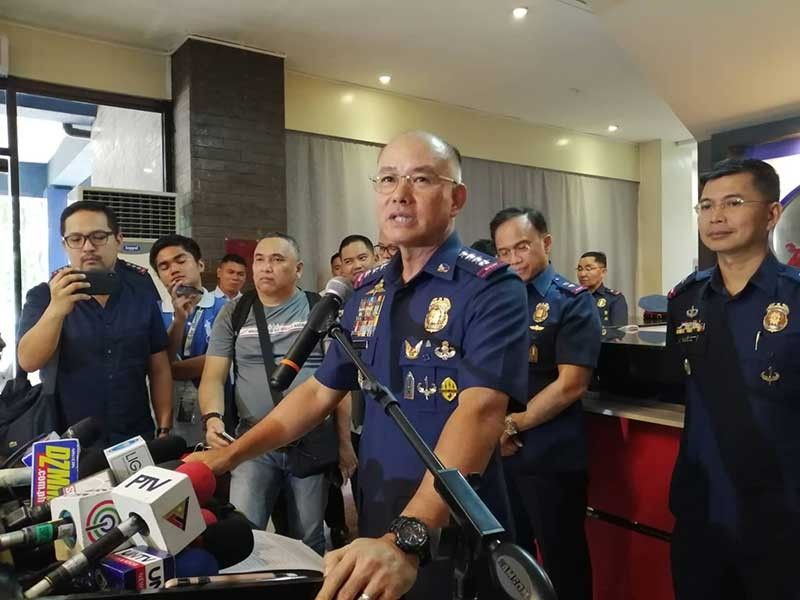 MANILA. Philippine National Police Chief Oscar Albayalde said in a press conference on September 23, 2019 that the insinuation that he is involved in recycling of illegal drugs is a "recycled issue." (Photo by Third Anne Peralta-Malonzo/SunStar Philippines)

In his defense, Albayalde said this is a “recycled issue” arising from “personal perceptions.”

He urged lawmakers to outrightly name the police officers and officials involved in the said illegal activity.

“These are all recycled, kung uso kasi ‘yung recycling sa droga baka uso din ‘yung recycling ng mga personal perceptions. As I have said these are all personal perception and we are covered by laws also, rules and regulations. Just to make things straight, this is the nth time na sasabihin ko ito, ever since the first time I was appointed, I think I have explained so clearly. To make things straight and to make records straight kasi for the nth time palaging nare-recycle po yan,” he said in a press conference Monday.

“I think just to be fair to everyone kung sino man ang sinasabi (nila) kailangan naman sabihin (kung sino), hindi ‘yung insinuation na ganun kasi it's really very hard when you are doing everything already and yet you are being accused of something na hindi mo naman nagawa and hindi nangyari kaya for the record sinabi these were all dismissed and for the record wala po akong, investigation showed na wala akong kinalaman,” he added.

Casurao said allegations against Albayalde were addressed when he was provincial director of Pampanga. He was relieved and those who were criminally charged in court were cleared.

“I think of this ninja cops has been well explained at the time when General Albayalde was the provincial director of Pampanga when this incident cropped up but the necessary action has been made when he was relieved administratively and those who were found to be criminally liable were charged in court. It just so happen that those who were charged were cleared also of the charges about possible involvement on drugs,” Casurao said.

“Apparently yan ang pinanggalingan nung issue na yon nag-explain naman si Chief PNP. And he believes that it could have been the source of all these speculation kaya tinignan ko naman," he added.

Those charged were Criminal Investigation and Detection Group (CIDG) Pampanga head Bienvenido Reydado and six of his men. This was in 2014.

The group was known for the so-called "agaw-bato" scheme. They would arrest known drug lords in Central Luzon, then release them but keep their money and illegal drugs.

Albayalde was the Pampanga provincial police director at the time. He was relieved over command responsibility.

“Well it started when this issue about ninja cops came out. The Napolcom will not allow all this issues to pass by without inquiring so I got the occasion to talk it out with the CPNP and he showed me documents regarding the possible source of the issues,” he said.

The practice of recycling seized illegal drugs came up when former CIDG director now Baguio City Mayor Benjamin Magalong told the Senate committee on justice about police officials who are allegedly involved in the "agaw-bato" scheme and ninja cops.

Casurao said the Napolcom may ask for the copy of Magalong’s report to compare it with the documents being presented by the PNP.

In an interview with reporters, Senate blue ribbon committee chairman Richard Gordon, using hand gestures, hinted on the rank of the police official allegedly involved in the recycling of drugs. He was apparently referring to a four-star police official although he did not say if it was active or retired.

Casurao said it was unfortunate that such issues and speculations are coming out now that they are about to finish the campaign against ninja cops.

The others either went on absent without leave or were kicked out from the service.

For his part, Interior and Local Government (DILG) secretary Eduardo Año said it would be better if those erring cops will be named publicly so they won't have time to lie low and clean up their mess.

“It could have been better kung nagkaroon ng direct coordination anytime naman pwede mag-usap ang bawat ahensya magdala ka ng representative mo may inter-committee of anti-graft you don’t have to go to Senate to announce anything if you want to stop these criminal activities particularly on the operation so siguro kami dapat ang mag-usap-usap dito mas mabilis ang aksyon,” he said. (SunStar Philippines)