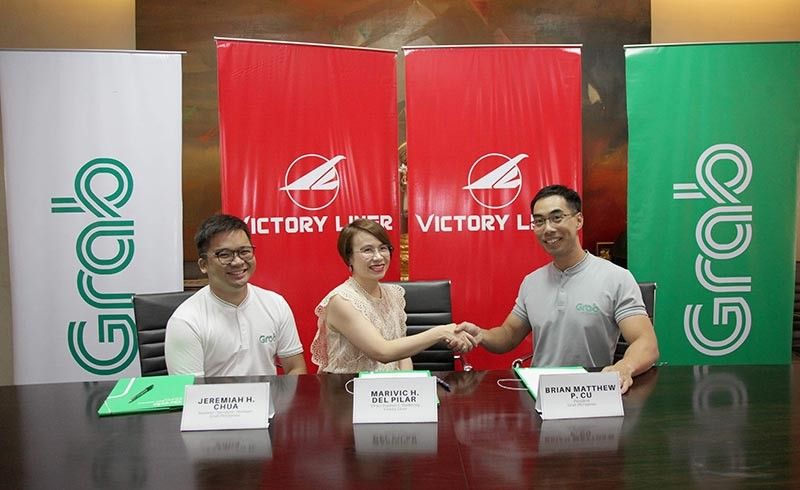 TWO of the country's most recognized names in the transport services sector recently sealed an agreement that would now enable Filipino commuters to use the Grab app in booking a bus ride via Victory Liner to Clark and Dagupan.

The partnership was the first time a bus services company such as Victory Liner, the biggest bus company in Luzon, allowed its services to be included in the ride-hailing Grab application.

In signing ceremonies at the Victory Liner offices, Marivic del Pilar, vice president for Treasury and Marketing, met with Grab Philippines Chief Operating Officer Brian Cu and Jeremiah Chua, Grab's Business Development manager, in an event touted as a landmark partnership that could eventually become a model even to other Point-to-Point (P2P) bus services in northern and Central Luzon.

"This partnership is based on our mutual desire to give innovative services and convenience to our Filipino commuters. Through the powerful technologies provided by Grab, our kababayans abroad can go straight from the airport to their homes using the Grab application. Grabbing a bus ride to the North is as easy as using your smartphone," said Del Pilar.

"Though Victory Liner has its own online booking services, it only caters to services provided by their provincial buses from Manila to other points in Northern and Central Luzon," she added.

With Grab, commuters can book a Victory Liner ride going to and from Clark in Pampanga, and Dagupan City in Pangasinan.

Clark is one of the fastest rising megacities in the Philippines, with its sprawling Clark City and international airport.

Dagupan, Pangasinan's capitol city, meanwhile, has a big overseas Filipino worker population who rely on Victory Liner buses to reach the Clark international airport in a jiffy. Victory Liner is the only bus service company granted with the authority to ply the Clark-Dagupan P2P route.

"We are pleased with this landmark partnership with Victory Liner, which for 75 years remains as the number one bus services in Luzon. We are privileged to attach our brand to the Victory Liner brand and hope that our fellow Filipinos especially those living in Central Luzon and Dagupan, Pangasinan would continue to enjoy using the Grab app now capable of securing a bus ride safely and conveniently. No more long lines and no more chance passenger bookings," said Cu. (PR)