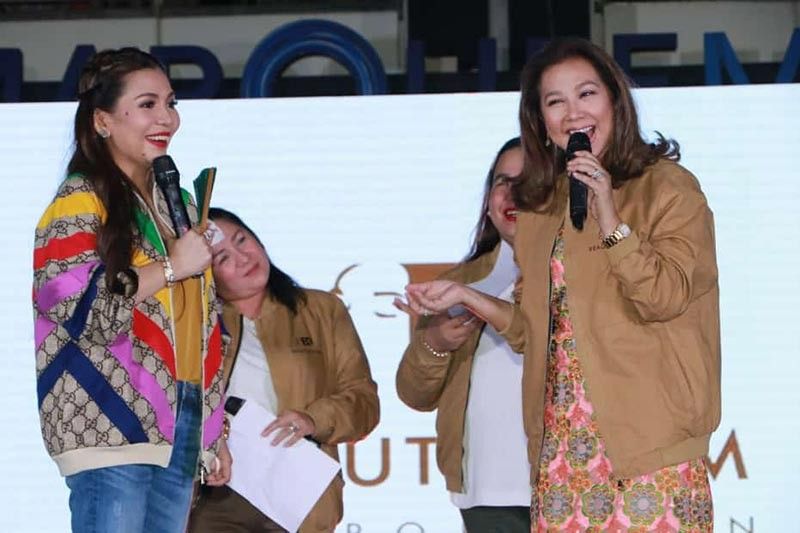 Roxas was a surprise guest for Beautederm Corporation chief executive officer Rhea Anicoche-Tan, who has idolized the news anchor from her younger years.

"I took up Mass Communication because of you," Tan said as she stood face-to-face on stage with Roxas.

"I started a business because of you," Roxas said in return.

"I'm sure this is just the beginning of 10-fold of the success of Beautederm," she added.

Roxas is the wife of former Department of the Interior and Local Government secretary Manuel "Mar" Roxas.

Roxas appeared during the mini-concert organized by Beautederm for the grand opening of its flagship store in Marquee Mall.

Aside from Roxas, seasoned actresses Lorna Tolentino, Sylvia Sanchez and Glydel Mercado also made appearances and invited the audiences to visit the Beautederm store.

Rivera-Dantes is the face of Beautederm Home, which features an exquisite line of home scents.

Beautederm started in 2009 when Tan decided to leave her job as vice president for marketing of a big appliance store in Angeles City.

She started with a P3,000 capital and after a decade has grown to 88 stores and counting, and thousands of resellers and distributors across the country and abroad.

Beautederm products are notified as safe by the Food and Drug Administration (FDA). The company is also awarded by Superbrands which strengthens a brand's position, adds prestige and reassures consumers and suppliers that they are buying the best brand in its category.