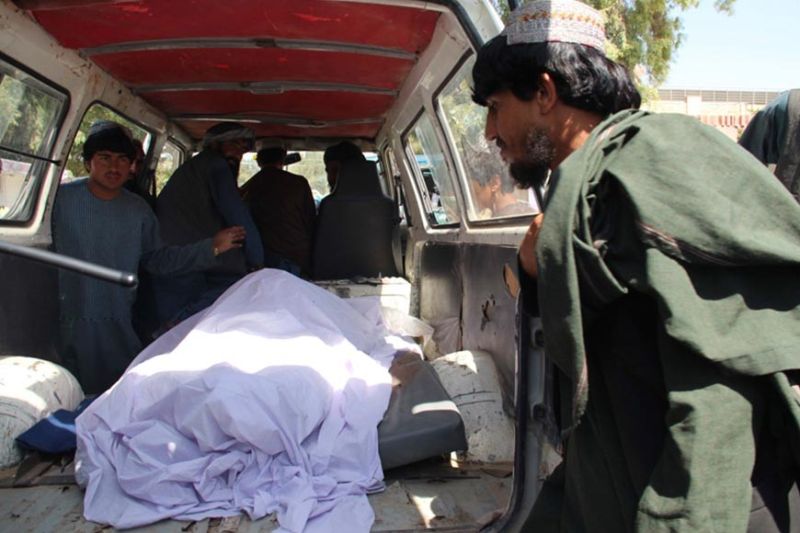 AFGHANISTAN. Afghans transport the body of a woman who was killed during a raid conducted by Afghan special forces, in the southern Helmand province, Monday, September 23, 2019. An Afghan official said Monday that at least 40 civilians have been killed during an Afghan special forces raid and airstrikes conducted against of Taliban in southern Helmand province. (AP)

The civilian deaths in Sunday night's raids on Taliban hideouts further rattled Afghanistan amid an upsurge in violence that's followed the collapse this month of U.S.-Taliban peace talks to end America's longest war.

"We are saddened and devastated to hear that civilians have lost their lives in an incident in Helmand despite President Ghani's repeated call for extra cautions in conducting military operations," said Sediq Sediqqi, President Ashraf Ghani's spokesman.

He added that Helmand's provincial governor has been instructed to send an investigation team to the area.

Abdul Majed Akhund, deputy provincial councilman, said most of the dead were women and children who were at a wedding ceremony in Musa Qala district. An additional 12 civilians were wounded and were hospitalized in Lashkar Gah, the capital of Helmand province, Akhund said.

The civilian deaths occurred during the second of two raids undertaken in different areas of Musa Qala, Attahullah Afghan, head of the provincial council, said.

The operations killed 22 Taliban fighters, including foreigners, Afghanistan's defense ministry said in a statement. Fourteen people were arrested, including five Pakistani nationals and one Bangladeshi. The statement said a large warehouse of supplies and equipment was also destroyed.

The raids came after a drone attack last week in eastern Afghanistan's Nangarhar province blamed on U.S. forces killed at least 16 and wounded tens of others, most of them civilians. U.S. forces said that attack was targeting Islamic State militants.

The violence comes as Afghanistan prepares for presidential elections on Saturday, a vote the Taliban vehemently oppose. The Taliban are at their strongest since their ouster in 2001 and hold sway over more than half the country, staging near-daily, deadly attacks across Afghanistan. The insurgent group has warned Afghans not to vote in the election and said their fighters would target election campaigns as well as polling stations. (AP)