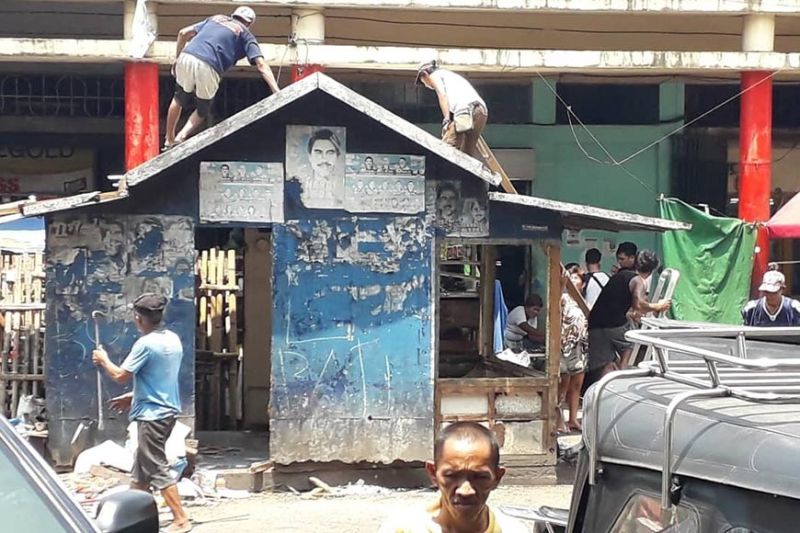 AROUND 14 barangays in Bacolod City were able to demolish 100 percent of the illegal structures within their areas of jurisdiction in compliance with President Rodrigo Duterte's directive to rid public streets of obstructions to facilitate the orderly use of thoroughfares.

Mayor Evelio Leonardia said Monday, September 23, he already received the reports of the 61 barangays and 14 of them already demolished the illegal structures in their jurisdiction.

"There's a substantial improvement on the demolition of the illegal structures in the city and we only have until September 27 to meet the deadline," Leonardia said.

He said the barangays' report will be submitted to the Department of the Interior and Local Government (DILG) for a validation.

"It's our expectation that it is going to be the DILG, which should give us the result of their investigation or observations and correspondingly also recommend the action on the part of the DILG as the supervisory and disciplinary body that governing the local government units (LGUs) all over the country," he added.

The memorandum stated that within 60 calendar days, significant results must be achieved, documented, and reported together with the efforts of the LGUs to sustain the same.

Last week, Leonardia issued Memorandum Order 110 to all the barangay officials to submit their accomplishment on the demolition of illegal structures within their areas of jurisdiction before its deadline on September 27.

The memorandum, dated September 11, stated that the clearing operations pursuant to DILG Memorandum Circular 2019-121 with the corresponding inventories of illegal structures, public nuisance, and any unlawful obstructions on public roads alleys, and other thoroughfares submitted to the Office of the City Mayor and duly reported to the DILG.

Leonardia said the period remaining from the date hereof to deliver significant results and the sustainability of the clearing operations to the reported to the DILG, provided in paragraph 4 of DILG Memorandum Circular 2019-121, will be on September 27.

Meanwhile, some of the sidewalk vendors at the Central Public Market and Masamart on Bonifacio Street already voluntary removed their stalls and transferred it to the Vendors Plaza.

On September 18, the affected vendors were given five days to vacate their stalls after the repeal of the City Ordinance (CO) 183, Series of 1980, or an ordinance providing for the disposition of kiosks and stalls constructed around the Central Public Market, of which the five-day deadline will end Monday, September 23.

Executive Assistant Ernie Pineda, cluster head on markets, said it is expected that the area will be cleared Monday and all the affected vendors should voluntarily vacate their stalls.

The affected vendors were also advised to send their letter of intent to the City Administrator's Office if they are willing to avail a space at the Vendor's Plaza.

Pineda said the City Government is also preparing to start the improvement and development of Vendor's Plaza to accommodate all the displaced sidewalk vendors.