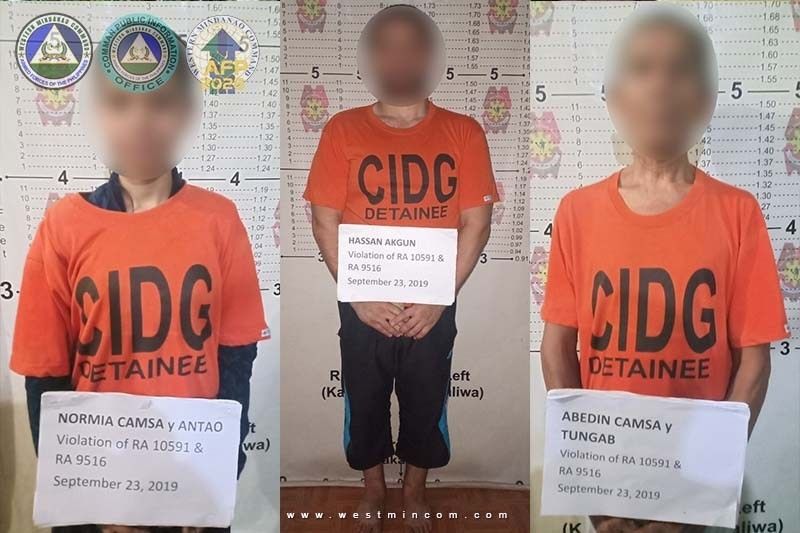 They were apprehended during a joint law enforcement operation in Sitio Nakan, Barangay Kapaya, Bagumbayan in Sultan Kudarat.

Also recovered were one improvised explosive device and other materials for the manufacturing of IED such as two gallons of powder substance; two machine timers; four 9-volts battery; one yellow bulb and one switch.

A backpack was also seized and was found to contain an ISIS flag, three led bulbs, two USBs, one resistor and five assorted wires.

“I commend the troops of the Joint Task Force Central and our friends from the Philippine National Police for this accomplishment. Strong interagency collaboration and cooperation is what we need for a successful operational activity to be attained,” said Westmincom commander Lieutenant General Cirilito Sobejana.

“Let us remain vigilant for there are still enemies out there who will always try to inflict havoc in the communities,” he added.

The arrested suspects and seized items were brought to Sultan Kudarat Provincial Police Office for documentation and filing of appropriate charges.

Seven persons were wounded when the suspects left the IED which exploded in the compartment of a motorcycle parked in front of the market along the national highway in Kalawag II in Isulan on September 7, 2019.

Read: 7 wounded in another bomb attack in Isulan

The ISIS earlier claimed responsibility for the attack but the military said the motive of the bombing was extortion by local terrorists. (SunStar Philippines)