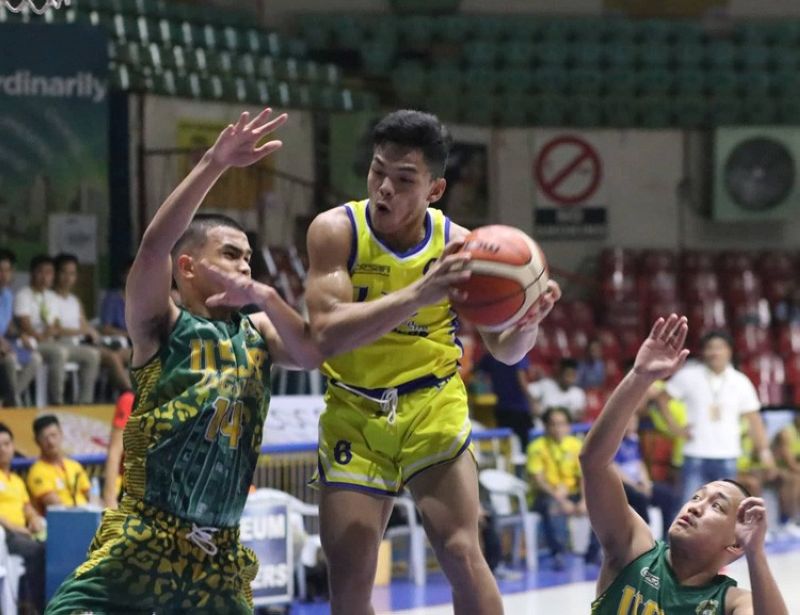 University of Cebu's Kenyon Pondoc grabs one of his seven rebounds in their game versus the University of San Jose-Recoletos during the high school division of the 2019 Cesafi men's basketball. UC eventually handed USJ-R third loss this season. (SunStar photo/Amper Campaña)

THE decision of the University of San Jose-Recoletos (USJ-R) Baby Jaguars to sport the same crewcut haircuts did little to change their luck as the reigning champions University of Cebu (UC) Baby Webmasters handed them their third loss in a row, 73-51, in the 2019 Cesafi high school basketball tournament at the Cebu Coliseum on Tuesday, September 24, 2019.

Eager to shed their misfortunes, the Baby Jaguars came to the game with clean-cut haircuts but the Baby Webmasters paid this no mind and proceeded to hand USJ-R yet another shellacking, leading by as much as 26, 60-34, to log in their fourth win in as many games.

On the other hand, USJ-R, a team that came into the tournament with high hopes for a championship after winning the title in the preseason Partner’s Cup, dropped to 0-3 and remained winless this season.

UC did not give the Jaguars any room the breathe from the get-go, establishing a 21-12 lead after the first before going up, 37-25, at halftime.

The third period was when the dam broke as UC kicked off the second half with a 14-4 sparked by baskets by Daniel Lapiz, Balaga and Rey Enriquez to raise their lead to 22, 51-29.

Balaga led the way for UC with 17 points highlighted by five makes from beyond the three-point arc while point guard Kenyon Pondoc had 10 points, seven rebounds, two assists and a steal.

Kevin Guibao scored 22 points to pace USJ-R, which got very little else from the rest of the team. (SunStar Cebu)