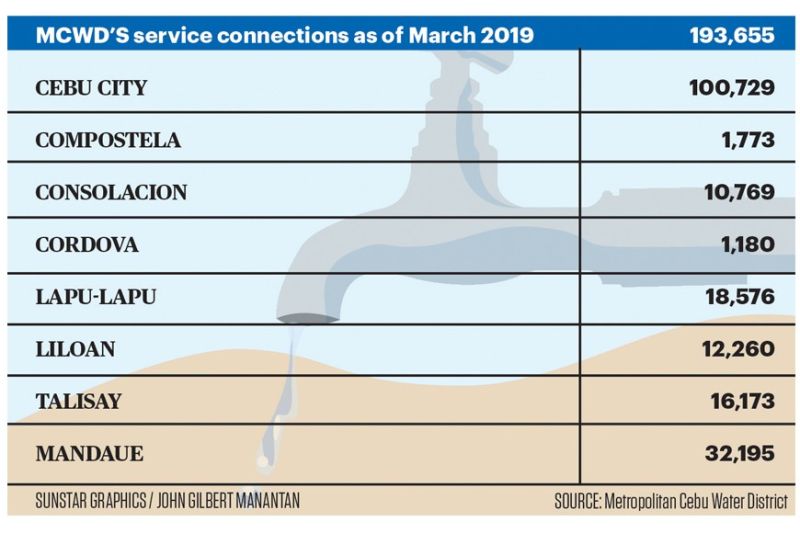 THE Provincial Board (PB) has asked the Office of the Ombudsman to explore the possibility of filing appropriate charges against “responsible and accountable officials” of the Metropolitan Cebu Water District (MCWD) for the water crisis in the metro.

As this developed, Cebu Gov. Gwendolyn Garcia said she will take steps to push for the Province to be represented in the MCWD Board.

In its regular session on Monday, Sept. 23, 2019, the PB passed a resolution expressing dismay, dissatisfaction and loss of trust and confidence in MCWD and its board members and officers over the “continued poor service and inadequate water supply to its consumers.”

The measure was filed by PB Member Glenn Anthony Soco, who heads the committee on planning and development. It was co-sponsored by PB Member Andrei Duterte.

For a town that is a major source of potable water to other local government units (LGUs), including densely populated Cebu City, Duterte said Carmen continues to experience a water shortage.

During Garcia’s earlier stint as governor in 2012, the Capitol entered into a joint venture with Manila Water Consortium Inc. to manage the bulk water supply in Luyang River in Carmen.

In 2014, the P1.1 billion water supply project started producing 35 million liters of water daily to homes in Metro Cebu. Water produced by the Carmen facility was sold to MCWD.

As of March 2019, the MCWD had 193,655 actual service connections in the cities of Cebu, Mandaue, Lapu-Lapu, Talisay, and the towns of Compostela, Consolacion, Cordova and Liloan.

The governor also shared the sentiments of her colleagues from the legislative department, lamenting that those that are really affected are households in the first and sixth districts.

Garcia reiterated that the water supply situation in Metro Cebu towns and cities highlights the need for Capitol to be represented in the MCWD Board so the concerns of the mayors can be raised before the body.

“We do not know whether the existing board has been, in fact, religious in its duties in seeing to it that as a water district, they should be able to answer all water service requirements. But the truth of the matter is, there would seem to be too much complacency, too much disinterest in addressing this present water crisis,” Garcia said on Tuesday, Sept. 24.

The MCWD is a government-owned and -controlled corporation created by Presidential Decree (PD) 198, which was issued by then president Ferdinand Marcos less than a year after he declared martial law in 1972.

The issue on the appointment of its board of directors has been the subject of controversy. The matter was even brought to the Supreme Court (SC).

In July 2002, then governor Pablo Garcia had argued that based on Section 3(b) of PD 198, the person empowered to appoint members of the board of directors of a local water district will depend on the geographic coverage and population makeup of the particular district.

In the event that more than 75 percent of the total active water service connections of a local water district are within the boundary of any city or municipality, the appointing authority shall be the mayor of that city or municipality, as the case may be; otherwise, the appointing authority shall be the governor of the province within which the district is located.

In a December 2016 decision (G.R. No. 197146), the SC stated that the reclassification of Cebu City into a highly urbanized city had rendered the continued application of Section 3(b) “unreasonable and unfair.”

“Clearly, the assailed provision no longer provided for substantial distinction because, firstly, it ignored that the MCWD was built without the participation of the provincial government; secondly, it failed to consider that the MCWD existed to serve the community that represents the needs of the majority of the active water service connections; and, thirdly, the main objective of the decree was to improve the water service while keeping up with the needs of the growing population,” the decision read.

The PB is not the only one dismayed by MCWD’s performance. The Cebu City Council, too, has expressed its “dissatisfaction” on the inefficient services of MCWD and urged Mayor Edgardo Labella to exercise his prerogative on the status of members of MCWD’s Board of Directors.

Cebu City Councilor Raymond Alvin Garcia, in his privilege speech during the regular session on Tuesday, Sept. 24, said the mayor can exercise his authority to look into the status of the MCWD’s Board of Directors under PD 198, or the Local Water Utilities Act of 1973.

The councilor originally moved for a resolution urging Labella to exercise his inherent power to dismiss the current MCWD’s Board of Directors and for the Local Water Utilities Administration (LWUA) to approve it.

Citing Section 9 of PD 198, he said the mayor has the power to remove the directors for failure to perform their duties, but subject to the review and approval of the LWUA.

He said the other water districts in the Philippines have many challenges to overcome, including the increasing population, and it should be for this reason that MCWD should have a “dynamic and proactive” board that is capable of establishing policies that adapt to the changing community.

However, Labella said he respects the terms of the MCWD officials.

He said he already informed the board that his constitutents were dissatisfied with the lack of wter in some areas in the city.

Councilor Alvin Dizon, for his part, said the diminishing water supply in Cebu was attributed to many factors, but he pointed out that some consumers were “not paying too much attention” on saving water.

“We cannot deny the fact that some people are wasting water, and perhaps we should look into that matter,” he said.

“The scarcity of water is not solely on the negligence of MCWD because according to the speaker (Garcia), the extraction of water can be done by any public and private business or sector,” he said.

The council then agreed to invite the MCWD Board of Directors in its next regular session on Oct. 1.

Asked for his reaction on the proposal to replace the board of directors, MCWD Board chairman Joel Mari Yu said: “This is a power grab. They want to replace all of Tommy’s appointees in the MCWD Board.”

Yu, who was referring to former mayor Tomas Osmeña, said they are protected by legal tenure. He also pointed out that the Department of the Interior and Local Government (DILG) issued a memo urging LGUs to respect the terms of water district board members.

Yu said the DILG has been issuing memos since the Corazon Aquino administration reminding LGUs that they don’t have authority over board members with unexpired terms in water districts.

In January 2019, DILG Secretary Eduardo Año, in a memo, also reminded local officials not to poke their noses into the operation of local water districts because these are autonomous.

The memo cited PD 198, which provides that once formed, a local water district is not under the jurisdiction of any political subdivision. The national government agency tasked to oversee local water districts is the LWUA. (JJL, With a report from MVI)