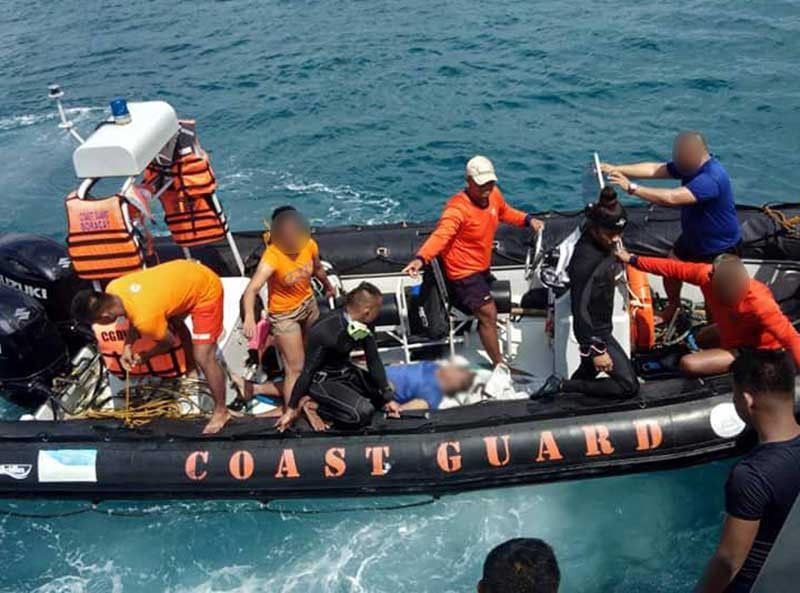 BORACAY. Coast Guard personnel conduct search and rescue operation after a dragon boat team was inundated by sudden big waves on September 25, 2019. Seven of the 21 persons on board drowned after the boat capsized. (Photo from Coast Guard Station Aklan)

(UPDATED) Seven members of the Boracay Dragon Force drowned when their boat capsized off Boracay Island on Wednesday morning, September 25.

In an initial report, Philippine Coast Guard (PCG) spokesperson Captain Armand Balilo said the boat was carrying a total of 21 individuals, all members of the Boracay Dragon Force team, when it capsized around 7:40 a.m. Wednesday, in Tulubhan Bay in Barangay Manoc-manoc.

All the 21 persons on board the boat, 20 paddlers and one steersman, have already been accounted for. Fourteen survived.

Based on the Boracay International Dragon Boat Festival social media post, the team has been training for weeks at the Bulabog Beach.

A report from the office of acting Malay Mayor Frolibar Bautista said the sea was calm when the paddlers left Bulabog Beach for the White Beach. They encountered big waves caused by a squall about 300 meters from the coast of Barangay Manoc-manoc.

The boat sank and yet the paddlers held on. But big waves and a strong current caused the boat to capsize.

The report said the paddlers were "not wearing life vests and one of the victims did not know how to swim."

The Philippine Dragon Boat Federation, in a message posted on its Facebook page, expressed their sympathy for those who perished in the accident.

The federation said it advocates and gives utmost priority to safety given the perils that go with dragon boating, an extreme water sport.

"We encourage the use of personal flotation device during training and requires wearing the same in local regattas to make sure that we avoid incidents that lead to unnecessary loss of life. We also educate our member clubs (on) proper safety protocols in case of capsizing or sinking of boats," the federation stated.

The group said it is offering its services for free to all dragon boat clubs in the Philippines, including non-members. The Boracay Dragon Force is not a member of the federation.

Last August, the team won a silver medal for the 300-meter mixed standard boat competition during the 4th Kadayawan Festival in Davao.

Investigation is ongoing. (With a report from Jun Aguirre/SunStar Philippines)