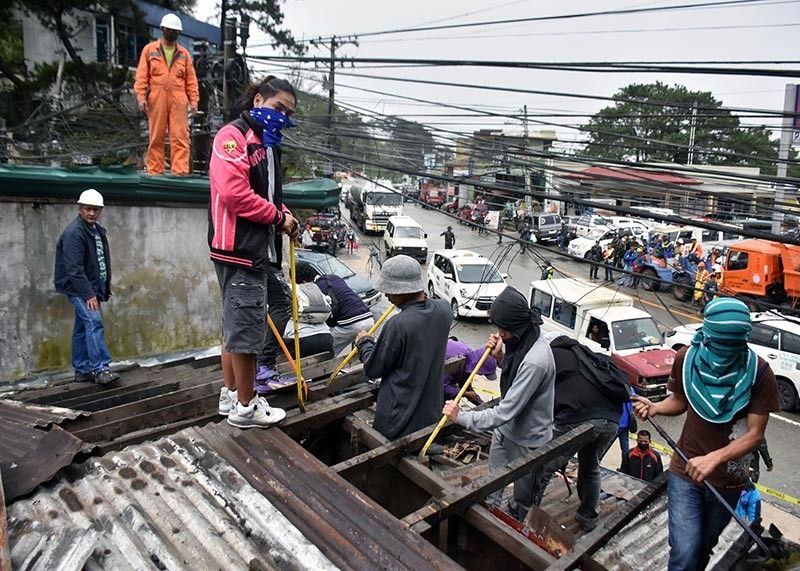 BAGUIO. The Department of Public Works and Highways and the City Government of Baguio started demolishing illegally built structures along Marcos Highway last week. More local government units in the Cordillera region are racing against time to clear primary and secondary roads of obstruction as the 60-day deadline set by the Department of the Interior and Local Government nears. (Redjie Melvic Cawis)

With less than a week from the 60-day deadline set by the Department of the Interior and Local Government (DILG) to local government units in the country to regain roads utilized for private use, two teams composed of 65 personnel from Philippine National Police, Bureau of Fire Protection, tanods, punong barangays, DILG, Department of Public Works and Highways, and other members conducted anti-obstruction drive operations along Kilometer 6 and Barangay Balili on Wednesday, September 25.

The Anti-Obstruction Task Force of La Trinidad, headed by the local chief executive and the chief of municipal police station, was created to oversee the implementation of clearing of all national and local road networks and sidewalks from any obstructions.

Prior to inspection conducted by anti-obstruction committee on September 5-12, establishment owners were requested to dismantle materials obstructing roads.

To recall, the DILG, pursuant to the directive of President Rodrigo Duterte, issued Memorandum Circular 2019-121, ordering the clearing of roads of illegal structures.

The DILG memorandum emphasized the purposes of removal of road obstructions and cannot be utilized for road widening.

The DILG has created a validation team to ensure LGUs in the country are on the same page in the implementation of the memorandum circular.