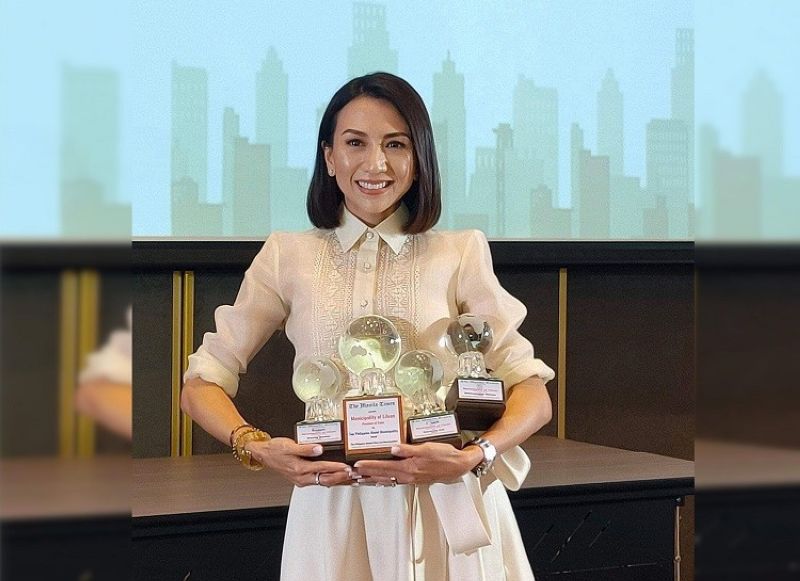 LILOAN, Cebu was named Top Philippine Model Municipality on Wednesday, Sept. 25, 2019, besting 33 other shortlisted municipalities from all over the country and garnering three other special awards for its good governance initiatives.

Mayor Christina Garcia Frasco received the trophies on behalf of Liloan in the 3rd Manila Times Philippine Model Cities and Municipalities Awards with the theme “Building Better Landscapes for the Next Generation” held at the New World Manila Bay Hotel in Manila.

“I gratefully accept this award recognizing Liloan as the Top Philippine Model Municipality and one of the most livable urban centers in the Philippines in the aspect of education, care for the elderly, revenue generation and business friendliness,” said Frasco, who flew to Manila for the ceremony.

“The pursuit and accomplishment of sustainable development and livability is by no means the work of government alone. In Liloan, we recognize the necessity of consensus in urban planning, the importance of multi-sectoral participation, and the value of instilling pride of place as a foundation for love of country and nation building,” she said.

The Education Hub Award was given to Liloan because, over the years, it has set education as a number one priority, supporting over 7,000 scholars to date. With a vision of building an educated population, Liloan constructed schools, classrooms and covered courts and distributed school supplies to students. Also, Liloan has a scholarship program that includes law school, medical school, masters and graduate studies and athletic scholarships.

Liloan also won the Retirement Haven Award for its “well-rounded, stimulating and joyful approach” in its programs for senior citizens. These include a yearly pension of P4,000 and health services for the elderly, as well as a one-of-a-kind Senior Citizens Center to provide leisure for seniors.

The town also has free medical consultation, free medicine, local pension and free medical and financial assistance for senior citizens. There is also a Seniors Got Talent, a competition of song and dance every May for the elderly.

The award was handed by Antonio Rivera, the manager of the Management Services Department of the Philippine Retirement Authority.

The town’s third recognition, the Wealth Center Award, was for generating local revenues through innovative governance.

Liloan had provided economic opportunities for SMEs (small and mid-size enterprises), farmers, fisherfolk and local artisans. Having won in the past years as the Most Business-Friendly Municipality in the region and at the national level, businesses have sprouted in the town, the most recent of which is the entry of a private entity that will operate a port to ferry passengers to other towns and to Mactan Island.

Its programs had led to the all-time high in investor confidence, bringing in multinational companies to consider Liloan as their home.

“It has been quite a journey getting here. As a woman and as a mother, being a mayor has not been without its sacrifices and challenges. Pinaagi sa atong panaghiusa ug panaghigugmaay, nahimong possible ang atong pagkab-ot sa atong mga pangandoy alang sa katawhan (Through unity and love, we are able to achieve our dreams for our people),” Frasco said. (PR)