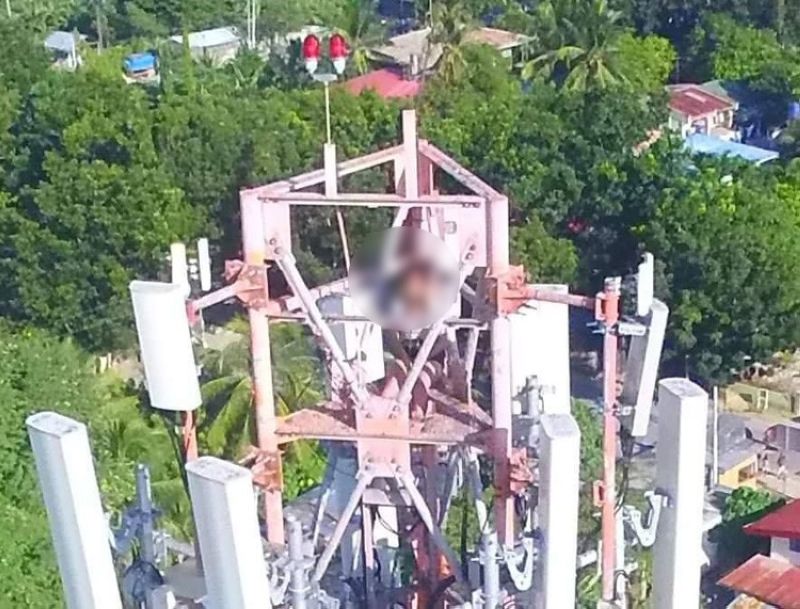 Due to disagreements with her elder sister over her boyfriend, a 17-year-old girl climbed the telecommunications tower in Barangay Poblacion, Medellin at 6:45 a.m. on Friday, Sept. 27, 2019. Five hours later, authorities were able to convince her to come down from the tower. (Photo courtesy of the Municipality of Medellin)

A 17-YEAR-OLD girl who climbed a cell tower in Barangay Poblacion, Medellin town in northern Cebu on Friday morning, Sept. 27, 2019, was rescued after almost four hours.

Police Corporal Marlon Montesclaros, on-duty investigator of the Medellin Police Station, said Marie (not her real name) came down at 10:50 a.m. after her brother-in-law and personnel from the Armed Forces of the Philippines (AFP) talked to her.

Montesclaros said Marie climbed the tower at 6:45 a.m. following her argument with her elder sister over her boyfriend.

Marie came from Cebu City and was accompanied by her sister in going home to Medellin. Their argument escalated when they reached their hometown.

Marie reportedly decided to climb the 80-meter-high tower after she threatened her sister that she would commit suicide.

The local police, AFP personnel assigned in the area and emergency personnel immediately conducted a rescue operation at 9 a.m.

The Municipal Government of Medellin decided to shut down the town’s power supply as a safety measure while authorities were rescuing Marie.

After she was rescued, Marie was taken to the Cebu Provincial Hospital in Bogo City for stress debriefing.