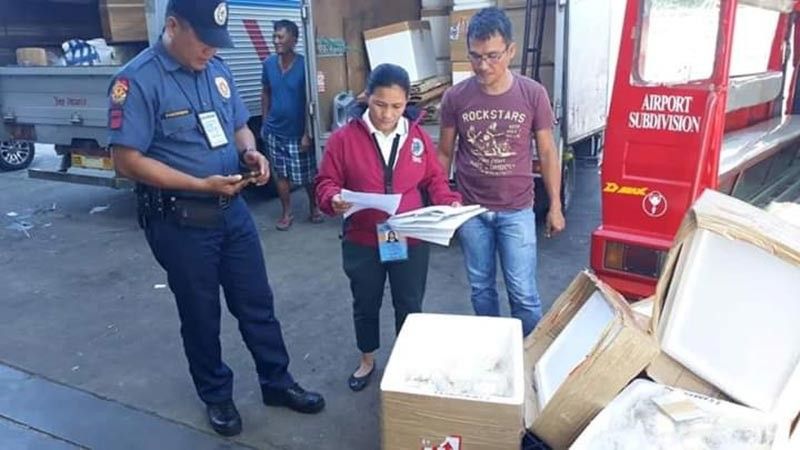 BACOLOD. Part of the 473 kilograms of pork products intercepted by members of the Provincial Task Force on African Swine Fever at the Bacolod-Silay Airport in Silay City from September 24 to 26. (Contributed photo)

THE Provincial Task Force on African Swine Fever (ASF) has intercepted a total of 473 kilograms of pork products at the Bacolod-Silay Airport in Silay City from September 24 to 26.

Janoya said these were seized by quarantine personnel and livestock inspectors along with other members of the task force by virtue of Executive Order (EO) 19-40 Series of 2019, temporarily banning pork products coming from Luzon.

"We continue to remind the public not to bring in pork products from Luzon as the temporary ban still takes effect," he said, adding that members of the task force are conducting regular and strict monitoring on the movement of pork products especially those coming from areas affected by ASF.

It is among the measures to ensure the safety of the P6-billion swine industry of Negros Occidental, one of the top producers of swine in the country.

The 90-day ban was implemented days after the Department of Agriculture (DA) confirmed positive cases of ASF in Luzon, particularly in farms of Rizal and Bulacan.

It covers live pigs, pork, pork products and by-products from Luzon whether fresh, processed or canned which can carry the ASF virus.

Janoya said all intercepted pork products were already shipped back to its points of origin, mostly from Manila.

These are supposed to be supplied to different restaurants and food establishments in Bacolod City.

Janoya said though Negros Occidental is surplus in supply of fresh or raw pork products, most establishments still source out their supply of processed goods from outside the province.

"Only few are into processing pork products here thus, we still get some supply of goods like hotdog and ham in other areas like Luzon," he said, adding that measures are in place to make sure that the province remains free of ASF.

The Provincial Task Force on ASF reported that intercepted products on September 26 included two packs of misdeclared chorizo from Spain.

These were not included in the list of products based on the shipment permit presented, Janoya said.

On September 21, around 27 kilograms of pork asado siopao from Luzon were also confiscated by members of the task force at the airport.

The products were disposed by the task force along with airport personnel.

It is one of the banned pork products from China, which is among the countries affected by the disease.

The Food and Drug Administration has already mandated to recall and seize imported pork meat products including Ma Ling from ASF-affected countries.