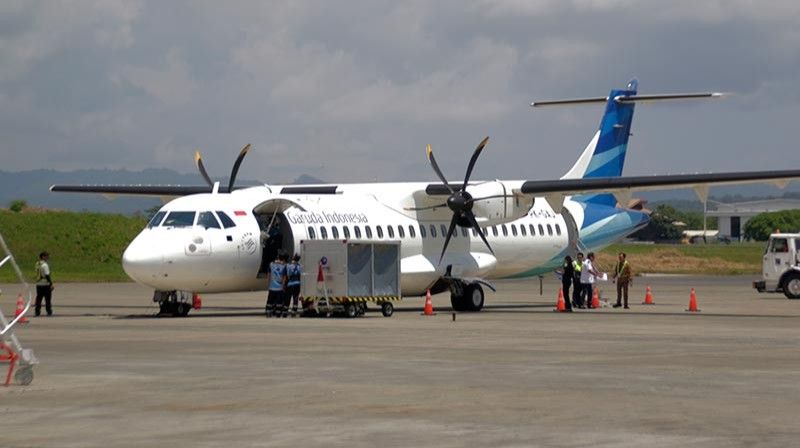 DAVAO. The Davao-Manado air route will be served by Garuda Indonesia's ATR 72-600 aircraft with an all-economy class configuration that can carry 70 passengers. It will be flying twice per week on Fridays and Mondays. (Ralph Lawrence Llemit)

WITH the revival of the air service connecting Davao and Manado on Friday, September 27, Mindanao Development Authority (Minda) chairperson Emmanuel Piñol pushed to strengthen the economic and tourism relationship between Mindanao and North Sulawesi in Indonesia.

Piñol said the Davao-Manado route, which will be serviced by the Indonesian flag carrier Garuda Indonesia, will offer direct and easy travel to attract investment exploration and tourist visits between the two areas.

He said it is an important strategic route under the transport and connectivity of the Brunei Darussalam-Indonesia-Malaysia-Philippines East Asean Growth Area (BIMP-Eaga) that strengthens Mindanao, through Davao, as gateway in the Association of Southeast Asian Nations (Asean).

Piñol said the route, which was in hiatus since 2012 due to lack of sustainability, must now be strengthened as it will bring more investors and tourists to Mindanao.

"I do not want this to fail, the President (Rodrigo Duterte) does not want that to happen," Piñol said during the Garuda Indonesia's Davao-Manado inaugural flight ceremony at the Davao International Airport.

Indonesian Ambassador to the Philippines Sinyo Harry Sarundajang said the re-establishment of the route is an enhancement of the air transport agreement signed between the two countries last 1972, followed by the expansion of air linkages between Brunei Darussalam, Indonesia, Malaysia, and the Philippines in 2007.

"It is my hope that connectivity between the people of Indonesia and the Philippines will be enhanced, since Davao is an economic powerhouse and Manado is both a business center and a gateway to many destinations in Indonesia, particularly the 17 provinces in the Eastern parts of Indonesia," Sarundajang said.

He said the flight is expected to be an alternative solution for Filipino tourists especially in Mindanao to visit Manado and other cities in Indonesia.

According to the Consulate General of the Republic of Indonesia, there are 8,745 persons of Indonesia descent who are living in Mindanao and more than 3,000 Filipinos and their descendants are living in Manado and other cities who have the potential to take advantage of the route.

Garuda chief executive officer Ari Askhara said the route to be served by its ATR 72-600 aircraft with an all-economy class configuration, can carry 70 passengers, and will be flying twice per week on Fridays and Mondays.

Minda deputy executive director Romeo Montenegro said they are looking forward to sustain the revived flight because of the "changing economic landscape between Davao and Manado."

"Our trade and investment facilitation in Davao is working with our counterpart in Indonesia and Manado to make sure that this will be a venue and opportunity for traders to really look at opportunities at both end," Montenegro said.