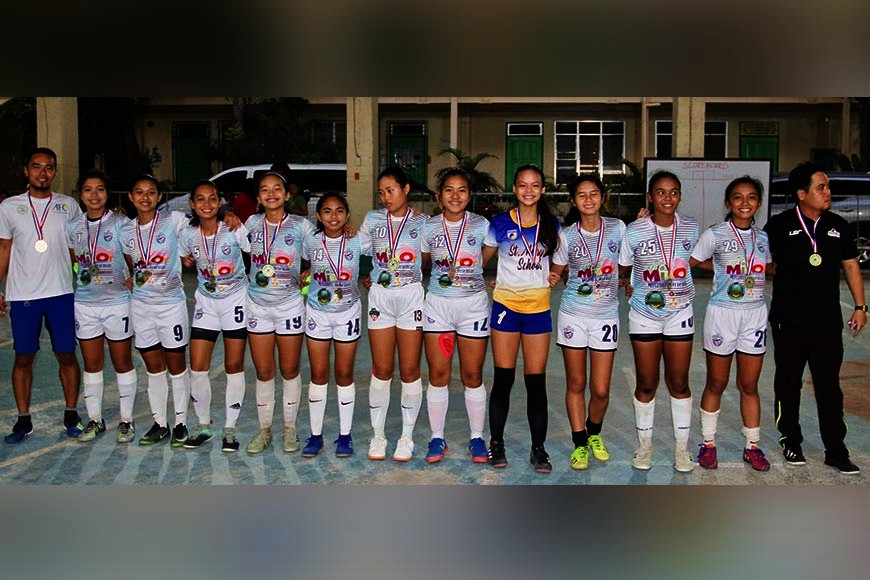 It also proved the excellence of the Higala Football Club program where all the girls of SMS are members.

"It was a team effort. Offense wins the crowd but defense wins the championship," said Cabio, who praised his new recruit Alexa Cailing from El Salvador and the rest of the girls.

The loss was a bitter pill to swallow for XU coach Dhon Lazo, who recently led the Cagayan de Oro Batang Pinoy team U15 team to a silver medal finish in the Batang Pinoy National Championship in Puerto Princesa, Palawan.

But the injury to starting goalkeeper Fiona Marie Ano-os spelled the difference in the hotly contested match. Ano-os suffered an ankle sprain in the early part of the second half and limped out of the match.

She fell awkward and sprained her ankle after colliding with St. Mary's forward Chantal Van Ommeren. She will be out for at least two weeks and can be ready for the Regionals in Tubod if coach Paul Cabio picks her as second goalkeeper to his starting goalkeeper Chevonne Uy.

Surprise package and a recruit from El Salvador, Misamis Oriental, Alexa Cailing played the match of her life scoring two goals for Higala Girls one over Ano-os and another one over substitute goalie Alleah Nicole Santocildes.

"Alexa wouldn't have scored those two goals without the team's support. I expected Alexa to perform. She was off form during the eliminations and semis but she made up during the finals," coach Cabio added.

Cailing opened the scoring for the Higala Girls in the 10th to give SMS the early lead. She scored the goal after getting an assist from defender Gail Loking during a counter attack.

However, their celebration was cut short when XU captain Nizza Jorj Lazo slipped an equalizer to the right side of SMS goalie Chevonne Uy to put the match back on square one at the half.

Then tragedy struck on XU goalie Fiona Marie Ano-os that proved to be the turning point of the match. The Higala Girls capitalized on her absence as they scored two more goals including the insurance goal from Chantal Van Ommeren.

Nizza Jorj Lazo scored a consolation for the XU girls with few minutes to go but this was not enough to even up as time ran out. XU could have equalized earlier but Mikaela Lazo's penalty shot hit the post.

"I was lucky I followed up a shot by Chantal which was fumbled by the XU goalkeeper," Cailing said of her second goal.

SMS advanced to the finals after defeating Abbas Orchard School, while the XU Girls made the championship match after beating Bulua National High School in the other half of the semis matches.

Bulua NHS of coach Jun Actub captured the bronze medal when the Strikers whipped Abbas School in the battle for third.