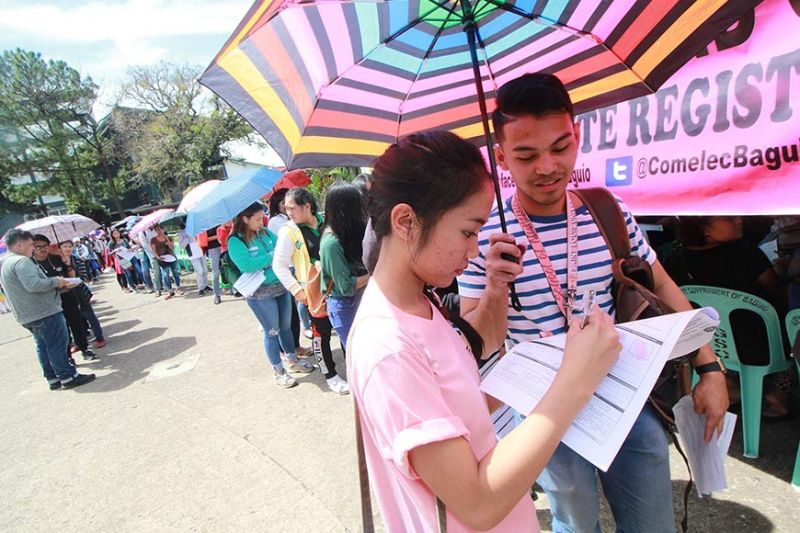 BAGUIO. On September 30, last day of voter's registration for the 2020 barangay elections, long queue of people await their turn to register at the Commission on Elections office at Governor Pack Road. (Jean Nicole Cortes)

THE Commission on Elections (Comelec) in Baguio successfully registered over 10,000 registrants for the upcoming May 2020 Barangay and Sangguniang Kabataan elections.

City Election Supervisor lawyer John Paul Martin said the original target of the City Electoral Tribunal was pegged at 10,000 registered voters but as of the morning of September 30, it recorded 10,231 registered voters since the start of the two-month long voter registration in September.

"The long lines that we see inside Comelec is a regular scenario that we experience especially during the last day of registration. We need to renew their attitude in registering and hopefully during the next voters registration, they will avail [themselves] of this right earlier but we are glad, however, because we have surpassed our projection and we are expecting an additional number of registrants until 5pm today," Martin said.

The electoral tribunal assured that even with talks of a possible suspension of the barangay and SK elections, all those who have availed themselves of two-month voter registration will be included in the new list of voters for the next presidential elections in 2022.

which indicates that before the process of an election, a voters registration will be done first. If ever the scheduled barangay and SK elections will not push through because of calls for a postponement, which is now on second reading at both houses of Congress, this will be carried over or they will be considered as voters for the 2022 Elections so no effort will be wasted," said Martin.

He pointed out that the off-site registration conducted by the Comelec recorded a normal 500 registered voters, contributing greatly to the increase in voter registration in the city particularly with new registrants coming from the Philippine National Police, Armed Forces of the Philippines, Indigenous Peoples groups and schools.

"We had to turn down other request for the votes registration because we only have a limited time to conduct the two-month long votes registration which ends today on September 30. We, however, committed that if the elections would be postponed and if the voters registration would again push through, we will be going to all the big schools in the city to have the students be registered," Martin added.

The City Electoral Tribunal removed around 30,000 voters from its list due to their lack of interest to vote in the last two elections.

About 5,455 or 53.26 percent were listed by Comelec Baguio to be first-time voters, while 754 personnel from the Baguio City Police Office deactivated their status, indicating an increase in the number of voters in the city who underwent the registration process.