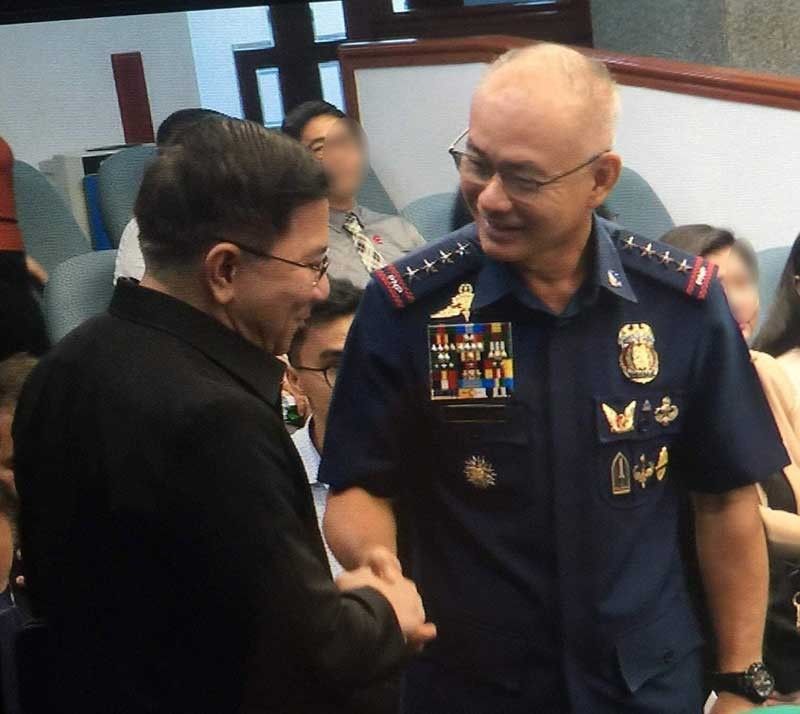 ABOUT 160 kilograms of methamphetamine hydrochloride (shabu) allegedly went missing after an anti-drug raid conducted by the Pampanga police in November 2013.

The 13 police officers involved in the raid were ordered dismissed, but the dismissal order was not implemented and the officers were merely demoted.

Philippine National Police (PNP) Chief Oscar Albayalde, who was the Pampanga police chief at the time of the raid, allegedly intervened in the implementation of the dismissal order against the officers.

These and other alleged irregularities were revealed at the resumption of the Senate committee on justice and human rights investigation into the so-called ninja cops and "agaw-bato" scheme on Tuesday, October 1, 2019.

They were then all members of the Anti-Illegal Drugs Special Operation Task Force of the Pampanga Provincial Police Office.

According to the spot report submitted by Baloyo, who led the group, the operation resulted in the seizure of 38 kilograms of methamphetamine hydrochloride (shabu) and the arrest of a certain Ding Wenkun.

Magalong said the operation prompted then PNP chief Alan Purisima to order him to conduct an investigation.

In the course of investigation, Magalong said they found several irregularities in the operation as well as in the report on operation submitted by the group led by Baloyo.

He said based on the accounts of several witnesses who assisted them in the re-enactment of the said operation, at least 200 kilograms of illegal drugs were confiscated and that the arrested person was Johnson Lee and not Wenkun.

“When (then Chief Superintendent Raul) Petrasanta, then Region 3 police director, found out, he immediately relieved (then Senior Superintendent Oscar) Albayade. He immediately conducted an investigation and filed a case against the team of Baloyo,” he added.

Magalong said it showed that Lee was able to escape during the operation and was able to seek help from barangay officials who, however, found him suspicious after he offered them money to release him.

The barangay officials then turned Lim over to the police but according to the witness, they were surprised he was not the same person presented by the police as the person arrested during the operation.

Magalong said they learned that Lee paid P50 million for his release.

For his part, Baloyo denied Magalong’s claims and stood by his report.

Magalong said criminal and administrative charges were filed against the 13 erring cops.

In November 2014, Petrasanta ordered the dismissal of the 13 policemen involved in the operation for grave misconduct.

But the dismissal order was not implemented. The order was received by the cops on March 2, 2016, or about sixteen months after it was issued.

They filed their motion for reconsideration on March 14, 2016

In 2017, then Central Luzon regional police office chief Amador Corpuz signed the order of demotion by one rank of the 13 policemen.

In his defense, Aquino said he ordered the review of the cases against the 13 cops.

He was, however, grilled by Lacson and by Senator Franklin Drilon over his failure to take action.

Magalong then urged Aquino to tell the Senate what the latter told him last week as to why he did not immediately impose the order.

Aquino said Albayalde, who was then the officer-in-charge of the National Capital Region Police Office (NCRPO), called him up and asked for the status of the said case.

“I asked him why he was asking and he said because they were his men,” he said in Filipino.

Albayalde admitted giving Aquino a call, but denied trying to influence Aquino on his decision on the case as he is not in the position to do so.

He also pointed out that Aquino was his upperclassman at the Philippine Military Academy.

“Yes, I asked for the status, only the status. I could not possibly influence an RD (regional director) or an upper class. Mr. Chairman, I’m just the RD and acting RD of the NCRPO then,” said Albayalde.

“But never in one time that I asked for any favor. I was asking for the status, that is the very reason why General Aaron here ordered for the review of the case which I think is normal in the process of the PNP, your honor,” he added.

Senate committee on justice and human rights chairman Richard Gordon then asked Albayalde if he and Corpus were classmates. Corpus was the one who demoted the 13 policemen.

“It’s just surprising to us here why General Corpus on his own would suddenly demote and amend the dismissal order of a high ranking general before him,” he said.

Maintaining his innocence, Albayalde questioned Magalong on why he failed to resolve the case when he was still a police official.

“I’m also wondering why that time also I think Mayor Magalong then was the DIDM (Directorate for Investigation and Detection Management), he has all the authority the power and all the connections to follow up their dismissal also,” he said.

In an interview after the suspension of the hearing, Magalong said throwing back the issue at him is a “convenient alibi” for Albayalde.

Magalong stood by his belief that based on the investigation that they conducted, Albayalde benefited from the said operation.

He said it was one of the reasons why he felt frustrated when Albayalde was appointed as the PNP chief after Senator Ronald Dela Rosa.

He maintained that he was just telling the truth and that the hearing was not scripted nor was it intentionally intended to damage anyone’s image.

“I am not lying,” said Magalong.

“Wala akong motibo (I don't have a motive), I did not even volunteer to come here. Ayoko nga pumunta kasi wala naman ako alam sa GCTA (I did not want to come here because I don't know anything about GCTA),” he added. (SunStar Philippines)