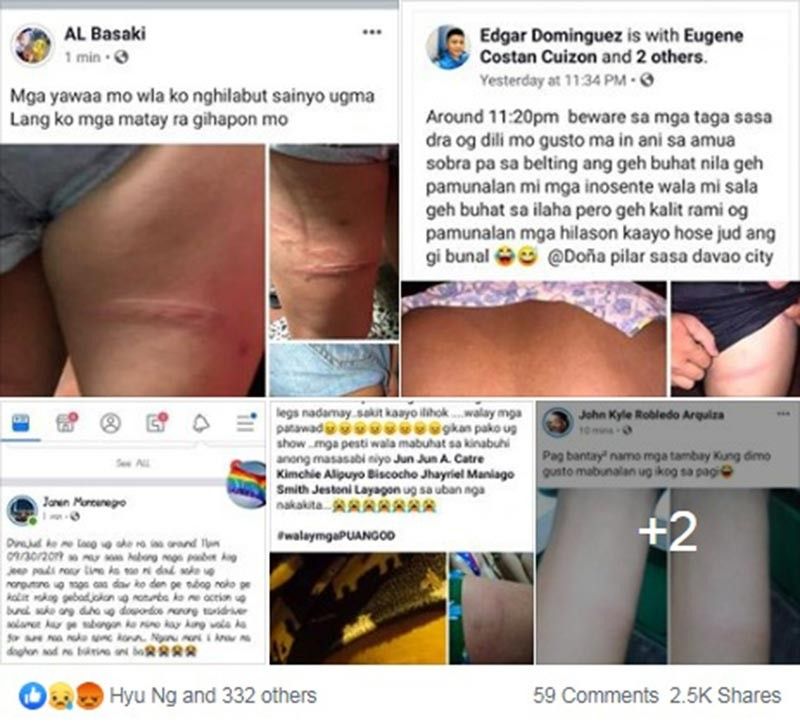 Several individuals aired their complaints on their social media accounts after a group beat them without provocation. These incidents reached DCPO, thus, they immediately called on the nearest police station to prevent a similar incident.

“As per investigation conducted by DCPO, it seems nga may mga kalabang grupo tong mga local gangs sa Sasa. I've already directed the Commander of Sasa Police Station to investigate and identify these suspects who are involved in these gang riots,” Tagum said.

Tagum likewise urged residents to refrain from going outside during late hours. He added that they undertook measures to address the incident and to arrest members of these local gangs.

“I have repeatedly advised our residents in the area to stay indoors during late hours so that they will not be affected by gang riots and to immediately report any incident to their local police for their subsequent actions,” Tagum said.

Naj Hao posted on Facebook a screenshot of all the complaints and expressed his alarm on the incident. His post has now almost 3,000 shares.

Edgar Dominguez, one of the victims, posted his experience on social media at 11:34 p.m. on Monday. He shared that at around 11:20 p.m., a group suddenly whacked him along Doña Pilar, Davao City. He likewise posted his photos showing the red marks on his back, leg, and arms. He also warned residents to be alert of these individuals.

Likewise, Janen Montenegro was traumatized by the incident after he was beaten by the group of individuals. The incident happened while he was waiting for jeepney when five people came to him and asked for his address.

“Gi-tubag nako ge kalit rakog gebadjakan ug natumba ko mo action ug bunal sako ang duha ug dospordos manong taxi driver salamat kay ge tabangan ko nimo kay kong wala ka for sure naa nako spmc karun II answered them and they suddenly hit me and I fell on the ground. Two of them were about to hit me with the a 2x2 wood block I’m just glad that a taxi driver helped me, if not, I might have been rushed to the hospital),” his post read.