Duterte stresses due process for Albayalde 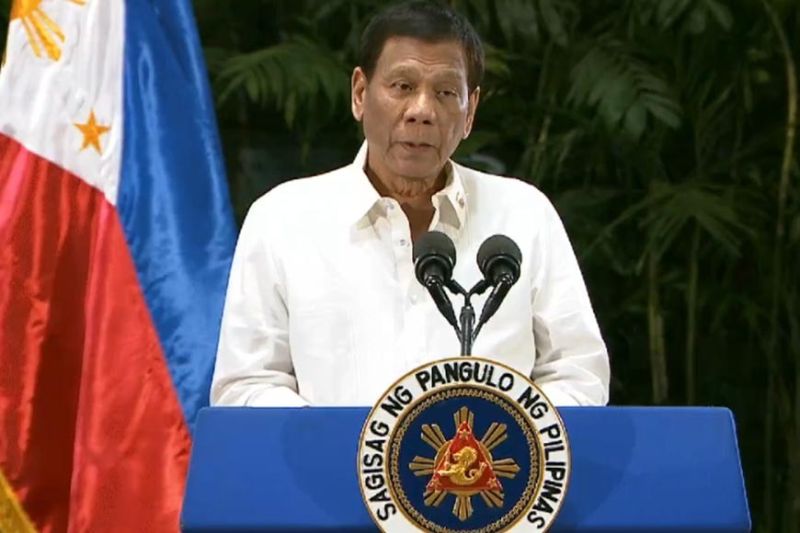 PRESIDENT Rodrigo Duterte said on Tuesday, October 1, that he will respect the legislative branch and wait for the Senate to complete its investigation into the alleged involvement of Philippine National Police (PNP) Chief Oscar Albayalde in the recycling of seized illegal drugs.

Duterte, in an interview before he departed for a five-day official visit to Russia Tuesday night, said he will wait for the Senate committee on justice and human rights to forward to him their report on the investigation.

Since the police is under the Department of the Interior and Local Government (DILG), Duterte said he will forward to DILG Secretary Eduardo Año a copy of the report and ask him to validate the findings of the Senate.

He said Año may conduct his own investigation and submit to him a report which will be his basis to “dismiss, discharge, terminate any or all of them.”

“If it comes to a serious thing as dismissing a top official here and there, it has to be for a good reason and there has to be enough proof,” the President said.

During Tuesday’s Senate hearing on the irregularities in the implementation of the Good Conduct Time Allowance (GCTA) system, lawmakers focused on the issue of ninja cops and police officers involved in the recycling of illegal drugs.

The 13 policemen, who were then assigned with the Pampanga Anti-illegal Drugs Special Operations Task Force, took part in an operation in November 2014 in Woodbridge Subdivision, Lakeshore View in Pampanga.

Magalong said he conducted an investigation on the said operation following the order of the chief of the PNP then, Alan Purisima, who he said sensed that something fishy was going on as the cops involved were able to buy sports utility vehicles after the operation.

He said they found that the operation resulted in the seizure of around 200 kilograms of shabu but the cops reported having recovered only 38 kilograms and that they presented a person different from the one they arrested in the raid.

Magalong said the policemen were paid P50 million by the Korean drug lord whom they arrested during the said operation in exchange for his freedom.

Albayalde, who was then the Pampanga provincial police director, was relieved over command responsibility.

In 2016, however, when Albayalde was then the National Capital Region Police Office director, allegedly intervened in the inplementation of a dismissal order against the 13 policemen.

Former Central Luzon police director and now PDEA Director Aaron Aquino said Albayalde called him sometime in 2016, when he was the regional director, to ask about the status of the case.

In his defense, Albayalde said he just asked for the status of the case and nothing more.

Lawmakers grilled Albayalde over his failure to detect the illegal activities of his men but Albayalde said he was kept in the dark by them.

In an interview after the hearing, Magalong said he didn’t believe that Albayalde was not aware of the irregularities in the operation considering that he also benefited from it.

Meanwhile, Año said that based on what he heard in the hearing, he believesd that Albayalde has no direct involvement in the illegal activities.

“Based sa mga narinig ko, except na tao niya iyon at nagki-care siya doon, there is no direct connection that he is involved and he tolerated the doings of his people,” he said.

“I think Albayalde is not in the position at that time. He wasn’t the chief PNP at that time at isa pa, upper class niya si Aquino. He cannot pressure somebody who is higher than him,” he added referring to the phone call made by Albayalde to Aquino. (SunStar Philippines)