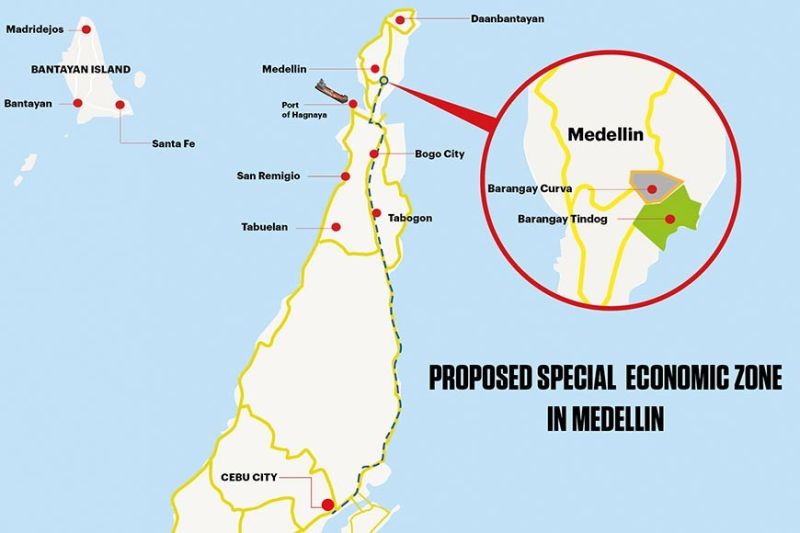 DECONGESTING THE METRO. The proposed Special Economic Zone in Medellin will encourage students in the fourth district to stay in their hometowns and work there, instead of leaving for greener pastures. (SunStar graphics / Enrico Santisas)

DEVELOPING the fourth district into an economic zone and improving health services are among the priorities of former congressman Benhur Salimbangon as consultant of the Provincial Government.

This early, he is already wooing locators at the Mactan Economic Zone that will be affected by the construction of the second airport runway in the next 24 years.

Benhur was tapped by Gov. Gwendolyn Garcia as Capitol consultant on fourth district development for P1 a year, given his experience in leading the district.

The governor made the pronouncement in a speech before Provincial Board (PB) members, some Capitol department heads and staff of the Bantayan District Hospital on Monday, Sept. 30, 2019.

While he may have already vacated his seat at the House of Representatives, Benhur said he will continue to work for the fourth district by helping the Capitol and his neophyte legislator-wife, Janice.

“This is just to help the government because we know what we’ve done and what still needs to be done. I served as a congressman for 12 years and I want to continue that service,” he added.

On top of Benhur’s plans as a consultant is upgrading the Bantayan District Hospital. Its 25-bed capacity will be quadrupled to 100, the same bed capacity as the Bogo Provincial Hospital in the same district.

Benhur said the towns of Bantayan, Sta. Fe and Madridejos are not only popular tourist destinations but retirement havens as well. Upgrading the hospital will help ensure quality health care for tourists, retirees and locals.

Benhur also wants to turn the district into a special economic zone (SEZ) to increase trade balance, employment, investment and job creation in the countryside.

The fourth district covers the city of Bogo, and the towns of Bantayan, Daanbantayan, Madridejos, Medellin, San Remigio, Sta. Fe, Tabogon and Tabuelan.

Benhur said main roads in these local government units had been widened to accommodate four lanes in preparation for the creation of the SEZ.

He said he discussed the matter with MCIAA general manager Steve Dicdican, who was also in Bantayan to sign a memorandum of agreement with the governor on the development of the Bantayan Airport.

“He (Dicdican) said MCIAA has 150 locators that they have to negotiate with to have them removed from Mactan. There’s little to no space to accommodate these locators in Mactan anymore. I told him that there are 5,000 to 6,000 hectares (of land) available in the district. If you can help me convince them to relocate to our district, we are willing to provide help,” Benhur said.

Benhur said this will open the fourth district to more tourism, employment and commerce opportunities, especially if the proposed airport in Medellin pushes through.

This will also encourage young students in the district to stay in their hometowns and work there, instead of leaving for greener pastures.

“It’s about time that an economic zone should be spread in the country by developing the countryside,” Benhur said.

Before his term in Congress expired, Benhur had a pending bill declaring part of the fourth district as an SEZ.

The move has been pursued by his wife, who now represents the district.

On July 31, 2019, Congresswoman Salimbangon filed House Bill 3239. It seeks the creation of the Cebu 4th District Ecozone that will cover areas of Barangays Curva and Tindog in Medellin.

In her explanatory note, Janice described an SEZ as a “responsive tool in eradicating poverty.”

“Of the entire province of Cebu, it is the fourth district that is best suited for the establishment of the said special economic zone. It has the widest stretch of flat land, a very rich land resource. It has a seaport in almost all of its component municipalities and city. It is likewise capable of producing literate, educated and skilled workers,” she said.

She said an SEZ in the district will decongest densely populated, highly urbanized areas in the province.

Benhur said that although the creation of the SEZ with Medellin, his hometown, as its center, is still in the proposal stage, various industries have expressed interest to invest in the venture.

He said he chose Medellin because of the availability of areas where locators can relocate.

He said an estimated 1,000 hectares, mostly old sugar plantations, are up for development in the town.

The former congressman said a steel manufacturing firm is already interested to invest in the venture and is looking for a place with a deep berth where its vessels can dock and transport materials.

He also assured that facilities would be in place so these industries could thrive.

Power firms like the Cebu Electric Cooperative have also expressed interest in increasing the capacity of their service and putting up new facilities in the fourth district in support of the proposed SEZ.

One firm that Benhur refused to name is interested in putting up a power plant in Medellin.

He said part of their selling point is the low fair market value of real properties in the SEZ.

In his pending bill, the former congressman also recommended the construction of an airport with a two-kilometer runway between Barangays Curva and Caputatan Sur in Medellin.

He plans to meet with officials from the Department of Transportation and the Civil Aviation Authority of the Philippines to discuss the viability of the project. (JKV)