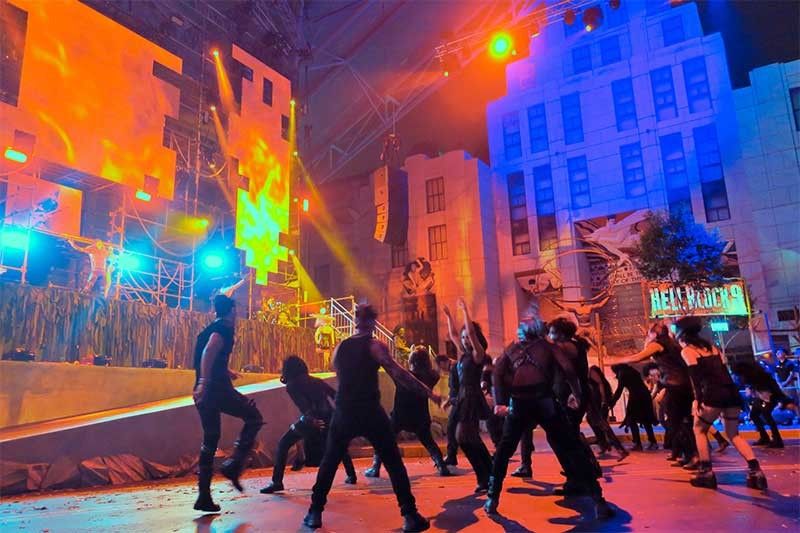 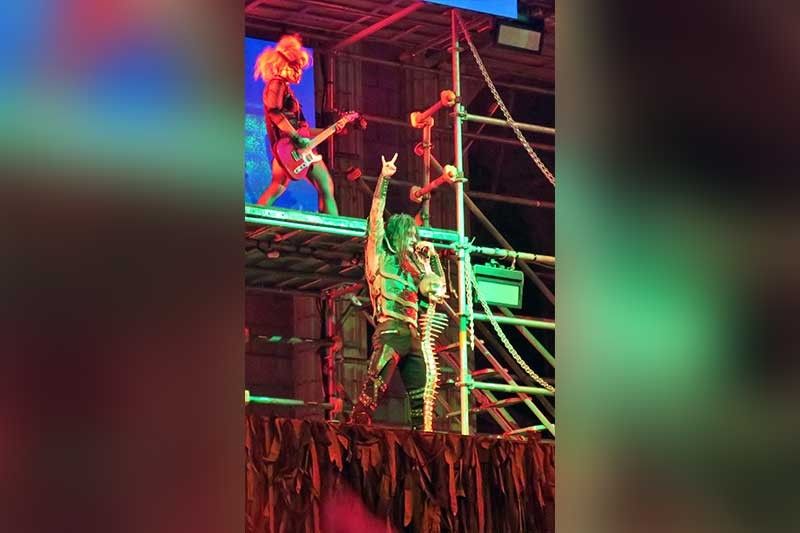 A morbid ‘metal god’ stepped on to the stage to look for an unsuspecting human offering. (Photo by Crystal Neri) 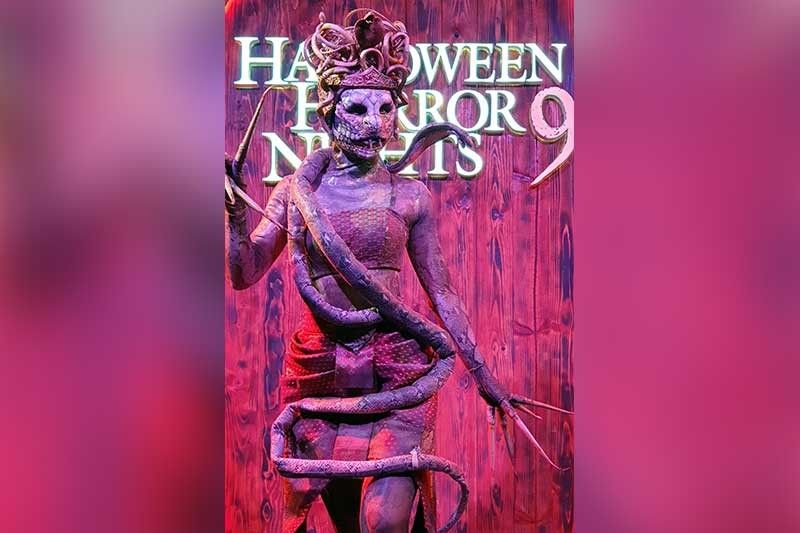 Headlining this year’s Halloween Horror Nights 9 is the Curse of the Naga, the theme park’s first-ever regional collaboration with the creators of Thai horror blockbusters Shutter and 4bia. (Photo by Crystal Neri) 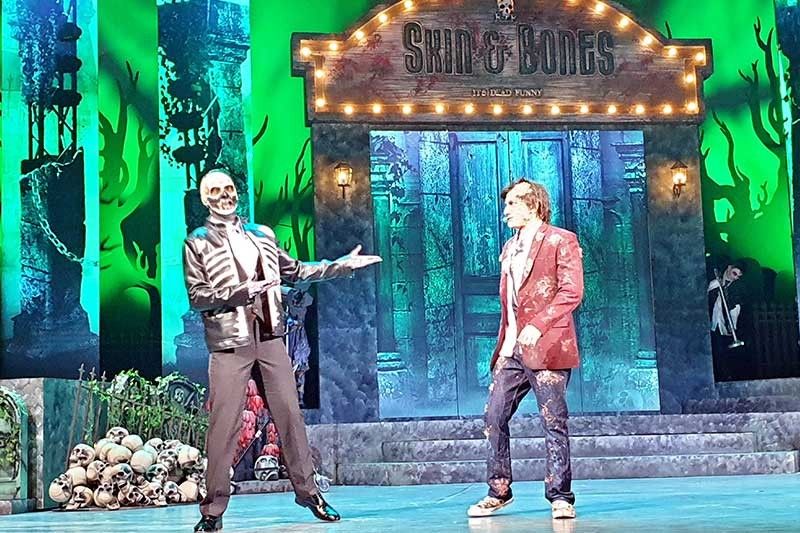 Dubbed as the top comedy show in the Underworld, hosts Skin and Bones perform acts at the Pantages Hollywood Theatre. (Photo by Crystal Neri) 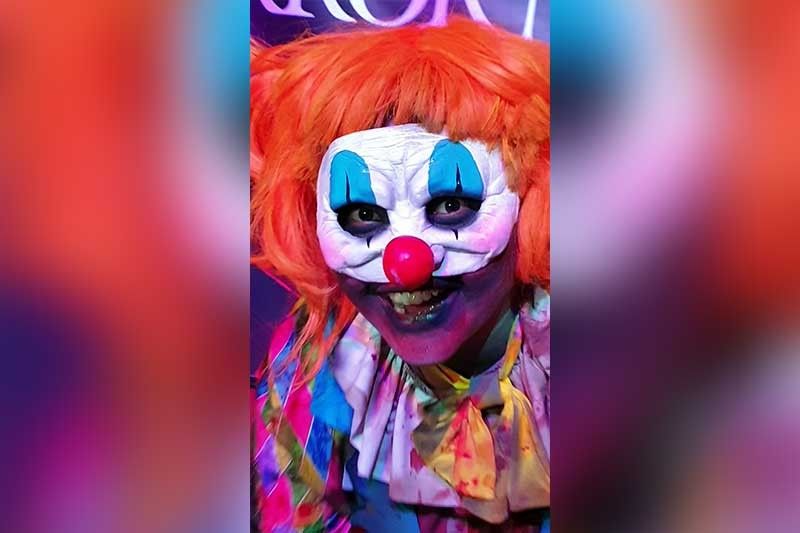 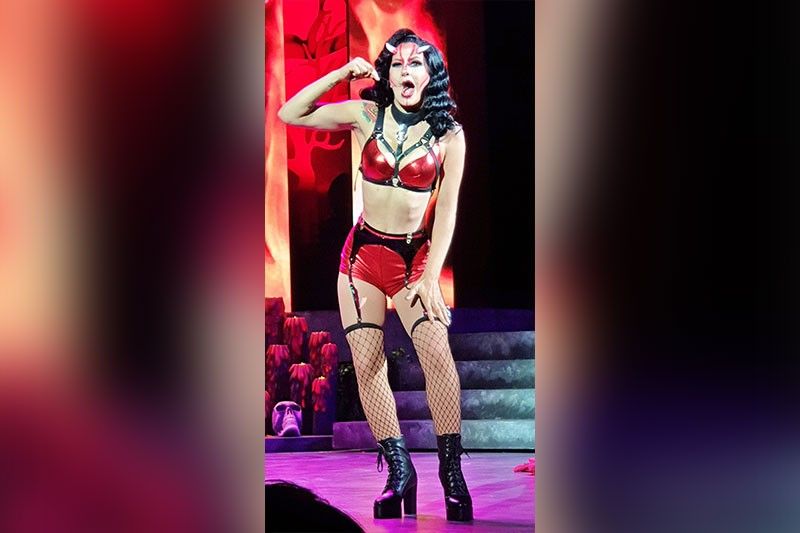 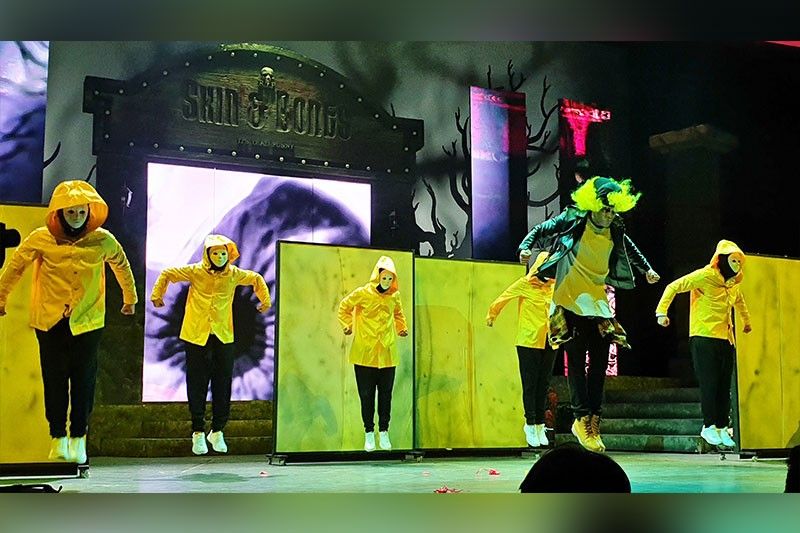 It pennywise’s forgotten and bitter brother, “That.” (Photo by Crystal Neri) 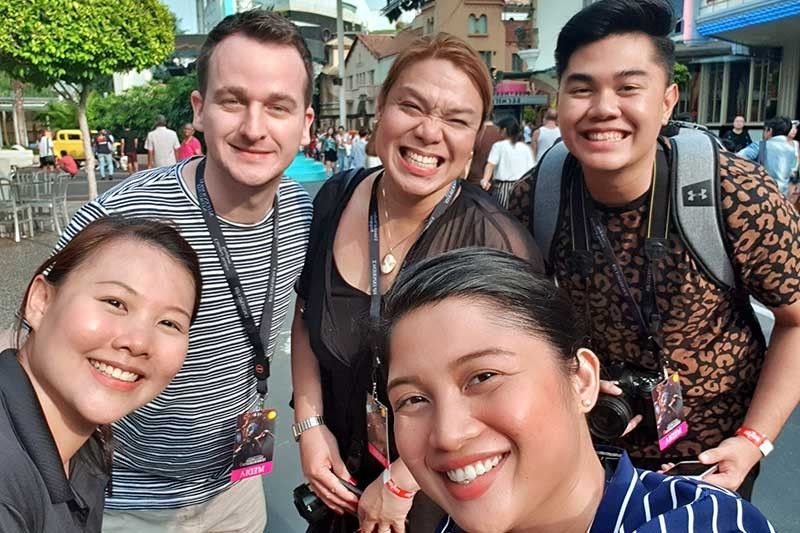 UNTIL Oct. 31 this year, horror fans visiting Universal Studios Singapore will be blown away by the lineup of blood-curdling experiences at the Halloween Horror Nights 9.

Having given up on watching scary movies nine years ago, I had to toughen up when I was invited by Resorts World Sentosa (RWS) to attend this scare-fest. Going through the ordeal was made easier by RWS communications team member Felicia Boey who let me cling to her with a death grip inside the haunted attractions. Thus, I survived! Here are my top three standout experiences:

Headlining this year’s event is the Curse of the Naga, the theme park’s first-ever regional collaboration with Thai horror directors Parkpoom Wongpoom and Gunn Purijitpany, for the creation of an all-original haunted house. The moment I stepped inside the Naga, a ghastly man greeted me with a cup of snake wine. From there, it was raining snakes – hanging from the ceilings and walls and snake-like creatures reaching out to visitors with their sharp 12-inch claws.

Naga, a mythical serpent-like creature popular in Thai folklore, emerged in a room full of sacred shrines and gold headdresses. The last part of the haunted house brought me inside a snake’s body, through innards and ballooned-up guts that closed in on me and grazed my body. Noxious odor, much like that of putrid flesh, rounded up the experience.

Dubbed as the top comedy show in the Underworld, hosts Skin and Bones performed acts at the Pantages Hollywood Theatre. The show mixed quirky Halloween-themed ads, shadow acts, and featured costumes with satirical twists to pop culture references. There was “Mariah Scary” wearing Jason Voorhees’s mask, “Hariana Grande” with a long, manly beard, and IT Pennywise’s forgotten and bitter brother, “That.”

What started out as a funny performance left me woefully unprepared for the red goo twist at the end. The seductress Devil in her two-piece spandex lit up the stage with a fire whip. Then, she began to swallow curved swords. For her final trick, she poked wires through her mouth – blood dripping and all. Gak!

A screaming mass of metalheads yelled at me as I walked the Death Fest Live scare zone in the theme park’s New York concourse. Characters dressed in skull masks and black leather carried bats, flags, and whips. They moved with manic, almost seizure-like bursts of enthusiasm. Surrounded by fire pits and morbid headbangers, the energy at Death Fest is simply overwhelming – exactly how a metal death concert should be.

At half-past nine in the evening, a morbid ‘Metal God’ stepped on to the stage. While the crowd basked in the savage sounds of the Death Trap band, the ‘Metal God’ grabbed a human sacrifice and dangled her up in the sky. I’ve never felt awestruck and scared at the same time in a musical show until then. The bulk of the set comprised of dazzling pyrotechnics that synched with the intense electric guitar riffs.

One spooky night to remember

If you are a horror fan, I cannot recommend Halloween Horror Nights 9 enough. If you’re a scaredy-cat like me, you’d still have fun. I often heard screams followed by laughter from the 400 media personalities whom I attended the event with on Preview Night.

That’s not all – the price of admission also includes all the rides and attractions at Universal Studios Singapore on event nights. During the day, there is a top-up fee option for a behind-the-scenes tour. All in all, for a price much cheaper than a concert, you get haunted attractions and all of the theme park’s exciting rides. Plus, your fun scare adventures can last up until peak night closing at 1:30 a.m.

Everything – from the costume design, commitment of the cast, even to the incorporation of haunted house ‘smellscapes’– is superb. As I headed to my room to retire for the day, I experienced my own eerie story:

Before I went to bed, I turned the TV and all the lights on just to keep me company. At around 3 a.m., I woke up from clicking noises, as if someone was using the kettle. It kept going click-click but I stayed paralyzed. The Halloween Horror Nights 9 special effects were too good that fear followed me out of the theme park.