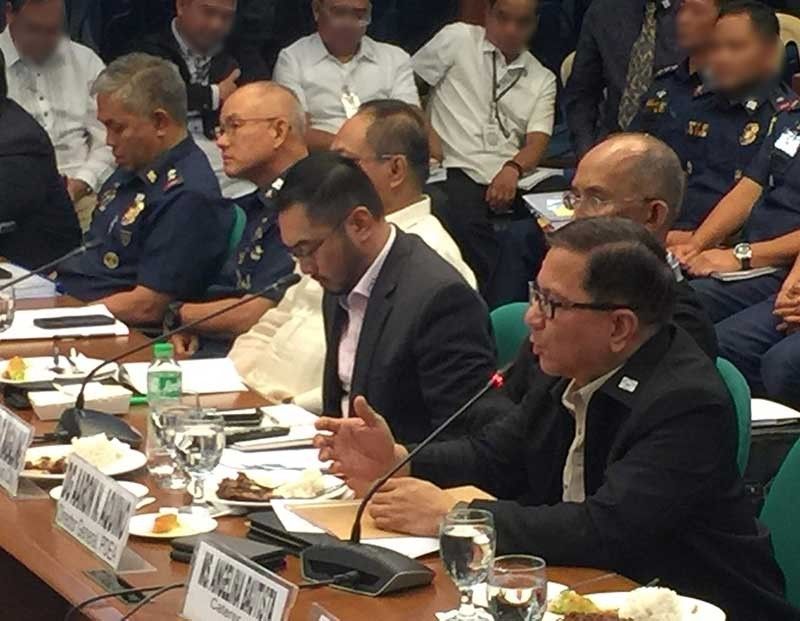 MANILA. PDEA Director Aaron Aquino (right) tells the Senate committee on justice on October 3, 2019 that PNP Chief Oscar Albayalde (2nd from left) called him in 2016 to ask him not to implement a dismissal order against 13 Pampanga policemen. (Photo by Third Anne Peralta-Malonzo)

At the resumption of the Senate investigation into the good conduct time allowance (GCTA) system and ninja cops on Thursday, Aquino said Albayalde, who was then the National Capital Region Police Office (NCRPO) officer-in-charge, called him sometime mid-2016 to inquire about the case against the 13 officers.

Albayalde allegedly not only inquired about the status of the case but also tried to halt the implementation of the dismissal order.

"Oca, ipapa-review ko sa legal ang kaso nila pero ipapatapon ko muna sila sa Mindanao (Oca, I will ask the legal division to review their case, but I will deploy them to Mindanao in the meantime)," Aquino recalled telling Albayalde.

Albayalde earlier denied trying the influence the implementation of the dismissal order, but admitted calling Aquino to inquire about the status of the case.

The PNP chief said he was not in the position to ask Aquino, who was his upperclassman, to stop the dismissal order.

Ninja cops refer to policemen who recycle and sell illegal drugs that were seized during legitimate anti-drugs operations.

The 13 officers took part in the November 29, 2013 anti-drugs operation in Woodbridge Subdivision, Lakeshore View in Mexico, Pampanga. Albayalde was the Pampanga police provincial director then.

They declared having seized only 36.68 kilograms of methamphetamine hydrochloride (shabu) when the total volume that was confiscated was actually 200 kilograms based on the accounts of several witnesses, then Criminal Investigation and Detection Group (CIDG) director and now Baguio City Mayor Benjamin Magalong told the Senate.

The group also reported having arrested a certain Ding Wenkun.

Magalong said witnesses related that the person arrested was Johnson Lee, not Wenkun.

The order was received by the cops on March 2, 2016 or about 16 months after it was issued. The cops filed their motion for reconsideration on March 14, 2016.

He admitted that he had no interest in the said case until Albayalde made the phone call.

The motion for reconsideration was resolved in 2017 and the order was downgraded from dismissal from demotion.

The order was signed by then PRO 3 director now CIDG director Amador Corpus, a classmate of Albayalde.

The senators, particularly Senator Franklin Drilon, grilled the officers on why the resolution of the case was “frozen” for about 16 months.

Aquino also bared that a friend warned him over the phone several days ago that several personalities were plotting against his family.

This was after the PNP recalled his 15 police security escorts.

Albayalde earlier confirmed the recall of Aquino’s security personnel, saying they will be deployed during the conduct of the Southeast Asian Games in November. (SunStar Philippines)