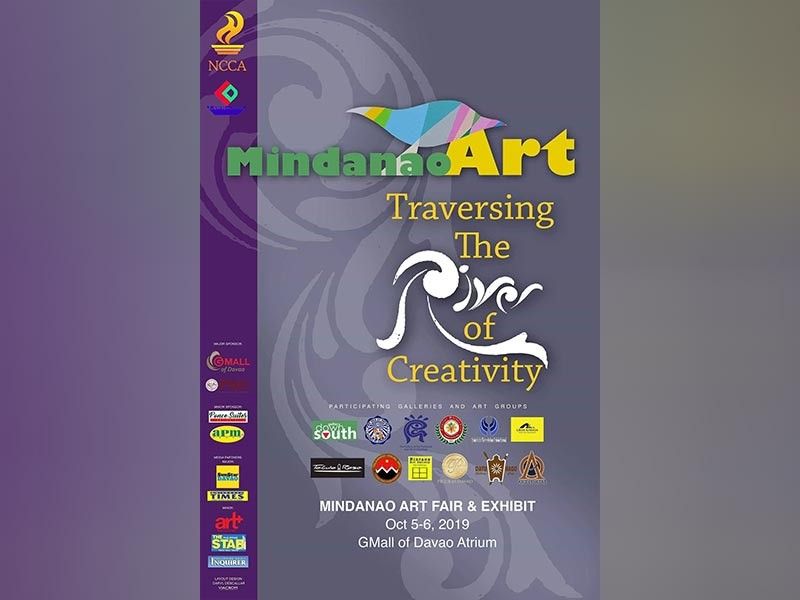 VISUAL artists from different Mindanao regions are coming together to show their masterpieces to a much wider audience along with a series of inspirational art talks in the very 1st Mindanao Art Fair, Exhibit and Conferences on October 5 to 6 at the Atrium, Gaisano Mall of Davao.

The activity aims to provide avenues to Mindanaoan artists, both established and emerging, to display their works to reach and inspire diverse audiences of all ages and make Mindanao artists be recognized further into the burgeoning Philippine art scene.

But apart from that, the organizers, Lawig-Diwa, a group of visual artists in Davao, hoped that the event will pave the way in building a sustainable art industry for talented creators in the region.

Stella Estremera of the Lawig-Diwa said the event hopes to gather art curators and art enthusiasts in one place and facilitate trades and partnership.

The event is centered on the theme, "Traversing the River of Creative Generations," recognizing the role of the rivers abundant in the Davao Region in the flourishing of life and development. The organizers envisioned a parallel impact on the Mindanao art scene.

Aside from the exhibition at the Gaisano Mall Atrium, a conference entitled Mindanao Art Talk is slated on Saturday, October 5, at the RSM Event Center of Philippine Women's College.

The one-day conference will introduce diverse yet holistic topics and inspirations in relation to arts and its business.

Reyes is the best-known art critic in the country and has authored and co-authored nearly 40 books on art. Cruz is a certified curator by Sotheby's Institute of Art in New York, while Leonardo is a visual art special education teacher at the Philippine High School for the Arts in Makiling.

The topic "Artist Curating Self" will be tackled by the second panel composed of Leeroy New (Art Installation), Dominic Rubio (History as Subject Matter), and Rosalie Zerrudo (Artist Collaborating with communities).

New hails from General Santos and is regarded as one of the top Filipino contemporary installation artists who became more popular for the muscle dress worn by Lady Gaga in her music video, Marry The Night, which he co-designed with Kermit Tesoro.

Rubio is among few artists most sought after by collectors who spent a few years perfecting his art in Davao City. While Rosalie Zerrudo is the mover behind Inday Dolls, the creations of female inmates in Iloilo City, who earned her master's degree in educational theater at New York University.

Teotico is managing director of the Galerie Joaquin group of art galleries and publishers of Art+ magazine. Hilario is well-known for his sculptures that have distinct images of saints in contemporary forms.

Dalisay, who is from Davao City, made his name in Metro Manila as an artist whose works are part bricolage, part sculpture. Yeung-Yap has worked extensively with indigenous peoples groups in Mindanao as a social entrepreneur in her younger years but has now focused on the Aetas in Tarlac, where her husband is a town mayor.

The Mindanao Art 2019 is one of the events in celebration of the Museums and Galleries Month by the National Commission for the Culture and the Arts in October.