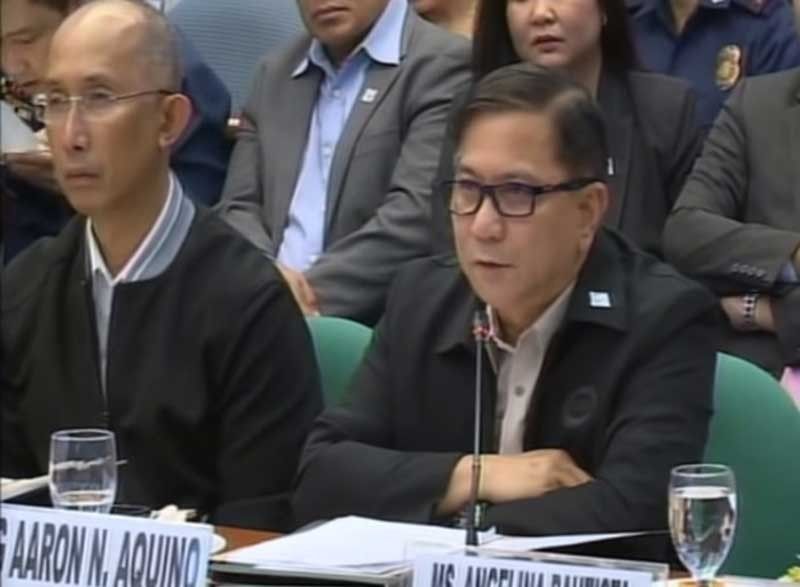 Magalong, a former director of the Criminal Investigation and Detection Group (CIDG), said he is already on a kill list.

He said he was informed by one of his security aides that a gun-for-hire has already been contacted by those who want him executed.

“Wala lang galawan ng pamilya (Just don't touch my family). They just have to make sure that kung may ginawa sila sa akin eh, I will not survive. Otherwise, all hell will break loose,” he said.

Aquino, a former director of the Central Luzon Police Regional Office, said he was hesitant to appear before the Senate committee on justice and human rights because he was thinking of his family's safety after threats against him “intensified.” He said he has been receiving “many threats” since he became a police official but these intensified only after he faced the Senate inquiry last week, during which he revealed that Philippine National Police (PNP) Chief Oscar Albayalde called him up sometime in mid-2016 to ask that he put on hold the dismissal order against 13 anti-narcotics policemen in Pampanga.

Albayalde served as the provincial director of Pampanga police. At the time he made the call, h was the National Capital Region Police Office (NCRPO) officer-in-charge.

“I’m so pressured and in (a) quandary because my family is at stake,” he said.

(I didn't sleep well last night because I kept thinking about the proper thing to do. I was in a dilemma, between my family's safety and what I have to say to the Senate.)

Aquino said he gathered his wife and children on Wednesday evening. His children were fully supportive of his plan to tell the truth.

On Thursday, Aquino said that aside from inquiring about the status of the 13 cops, Albayalde also asked him to set aside the implementation of the dismissal order against them because they were his men.

He said he then ordered the review of the case and ordered the transfer of the cops to Mindanao.

Aquino said he was relieved after his testimony.

Albayalde denied Aquino’s claim and maintained that he did not try to influence him.

“No of course not (I did not ask him not to implement the order). Again ‘yung sa amin mahirap magdikta ng isang upper class, it's really up to him. I don’t want argue on that anymore,” he added.

They all took part in the November 29, 2013 anti-drug operations in Woodbridge Subdivision, Lakeshore View in Mexico, Pampanga.

The 13 cops were ordered dismissed from the service in November 2014 after a CIDG investigation led by Magalong found irregularities in the conduct of the operation.

The dismissal order was served on March 2, 2016 and the 13 officers filed a joint motion for reconsideration on March 14, 2016.

Aquino took the helm of the Central Luzon Police Regional Office (PRO 3) in June 2016. He could not remember the exact date that Albayalde called him, but Aquino said it was in mid-2016 In 2017, the motion for reconsideration was resolved and the penalty meted to the 13 cops was downgraded to demotion.

The order was signed by then PRO 3 director Amador Corpus, Albayalde’s classmate at the Philippine Military Academy.

Among the irregularities in the operation that the investigators found, according to Magalong, was the underdeclaration of the illegal drugs seized during the operation and the switching of the arrested suspect.

Magalong said he was ordered by then PNP chief Alan Purisima to conduct an investigation on the said operation after the latter received a report that made him suspicious of the operation.

He said based on the accounts of several witnesses who assisted them in the re-enactment of the said operation, at least 200 kilograms of illegal drugs were confiscated and that the arrested person was Johnson Lee and not Ding Wenkun as stated in the spot report.

It was found that Lee was able to escape during the operation and that he was the same man who sought help from barangay officials.

The barangay officials as well as the policemen who encountered Lee said it was not him who was presented to the media.

Albayalde, who was the Pampanga provincial police director when the operation was conducted, was relieved after the irregularities were found.

He, however, maintained and admitted that he was kept in the dark by his men.

From GCTA to ninja cops

The Senate inquiry originally focused on the good conduct time allowance (GCTA) system and the irregularities at the National Bilibid Prison (NBP).

The ninja cops were brought up after Magalong testified that illegal drugs confiscated during legitimate police operations are being recycled.

Sotto, however, expressed support for Albayalde.

For his part, Senator Richard Gordon said Albayalde “dropped the ball from the very beginning.” "When the Senate is insulted, we turn really, really nasty. And that’s not a threat. We want you to know that we are serious about it. So I’ll call a spade a spade: You dropped the ball big time on this one," he told Albayalde.

Gordon made the remark after he repeatedly asked Albayalde on the legitimacy of the operation and the latter repeatedly said that there is a “presumption of regularity” in each operation.

The senators, including Franklin Drilon and Panfilo Lacson, were also irked by the “continuous lying” of Baloyo who stood by his report on the operation despite the testimonies of witnesses and the documentary evidence presented.

Baloyo was cited in contempt and is now detained at the Muntinlupa City jail.

Magalong said the said investigation is now being conducted because of the choices he made in the past, which was to not do anything about the incident.

He said there may no paper trail or documentary evidence linking Albayalde directly to the illegal activities of his men but it is illogical to think that he had no idea that something wrong is going on considering that he was the provincial director then.

"I'm not accusing Albayalde of anything. Why was there no logical action of a provincial commander when in fact there is a glaring violation by the operating troops?" Magalong asked Albayalde.

"You should have done something right or you do not do anything at all. Those are your choices. Why are we here? Obviously, you made your choice. You made a choice. That's why we're here," he added.

However, Magalong said he is not taking things personally.

Magalong even shook hands with Albayalde before the hearing started.

Magalong said he was overwhelmed by the messages of support coming from several police officers and officials.

He said he has been receiving various text messages thanking him for “standing up and fighting for the truth.” “Thank you, Sir, for standing and speaking up for the truth. We are carefully listening to all the resource persons’ testimonies, and honestly, Sir, we are really demoralized how they are trying to justify their unscrupulous and irregular actions back in that November 2013 buy-bust operation. Hindi naman po kami tanga sir and very obvious po na ginagawa nang sacrificial lamb si Police Maj. Baloyo et. al.,” Magalong read one of the text messages that he received. (SunStar Philippines)