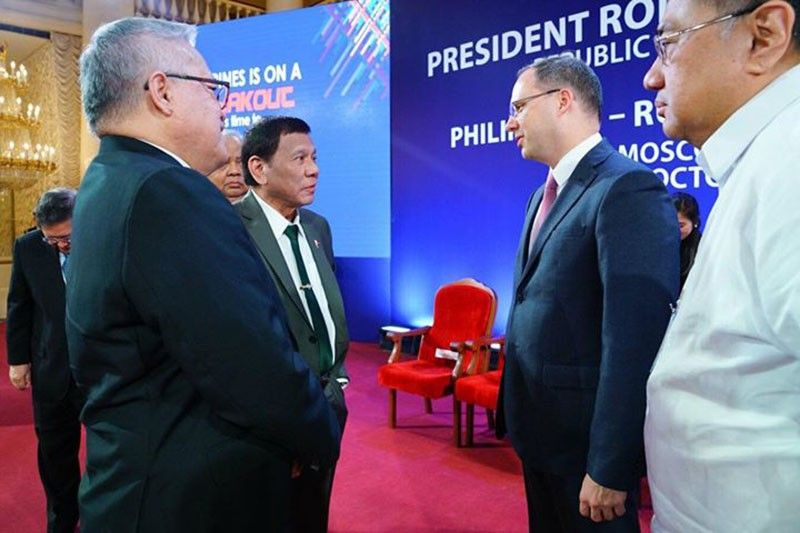 Department of Trade and Industry Secretary Ramon Lopez noted that the signing of five memoranda of understanding (MOUs), a memorandum of agreement (MOA), two distributorship agreements, and two memoranda of intent (MOIs) marks the "beginning of strengthening ties with Russian investors and market."

"There is a huge potential in expanding trade and investment cooperation between our two countries since the markets have not been really maximized in the past. This is just the beginning of what we see as a source of further market road for our two economies," he said.

"The intention is to widen the range of products being exported to Russia," the Trade chief added.

Another MOU was signed by Century Pacific Agricultural Ventures Inc. with Panasia Impex Co. Ltd. to export coconut milk products that will be distributed to Russia's markets.

Lifetruck International Inc., likewise, inked two distributorship agreements that will make them as the exclusive sole distributor for the distribution, promotion, and sale of Sturmanskie watches and Kamaz vehicles in the Philippines.

Immunitas Holistic Consultants Inc. and Institute of Practical Psychophysics signed a MOA that seeks to promote, distribute, and sell IPP-NLS technologies, particularly Metatron Micro MRI Systems and its variations in the Philippines.

An MOI was signed by the Department of Energy with Rusatom Overseas for them to jointly explore the prospects of cooperation in the construction of nuclear power plants in the Philippines.

DTI and Russia-Association of Southeast Asian Nations (Asean) Business Council inked an MOU on information exchange and collaboration on business development aimed at promoting trade and investment between the Philippines and Russia, members of Russia-Asean Business Council and Philippine companies.

The DTI's Board of Investments also signed an MOI with the Association of Industrial Parks of Russia to exchange information on investment environment and opportunities, as well as to attract and support foreign investments in the two countries.

Addressing over 400 Filipino and Russian business delegations, Duterte expressed gratitude over Moscow-based firms' interest to invest in the Philippines.

"I thank you for your interest to do business as we are with you. On the Philippine-Russian economic relations, Russia is a priority trade and investment market for the Philippines," the President told businessmen from the Philippines and Russia.

"With strong resolve and commitment, I am confident that our economic ties will continue to prosper to its full potential. The new business agreements forged today will bring closer to us in our goal," he added.

Duterte assured Russian businessmen that their investments in the Philippines are protected, as his administration made progress in creating a "conducive environment" for a robust economic engagement between the two countries. (SunStar Philippines)