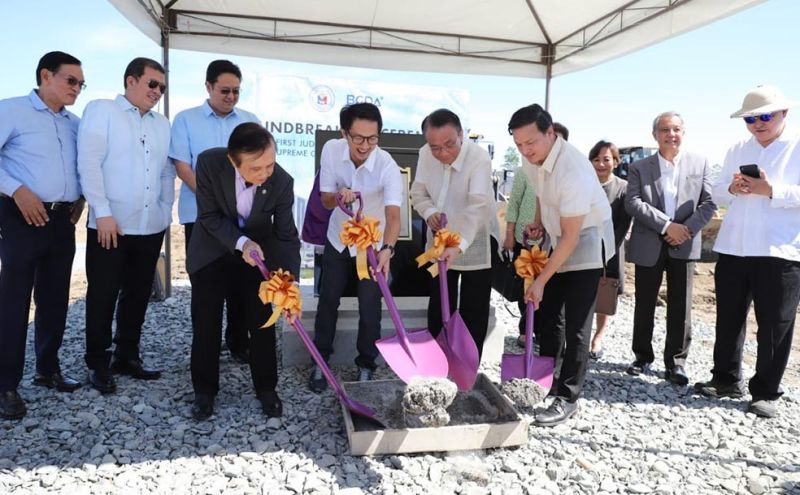 THE Supreme Court (SC) led the ground breaking of its first regional judiciary center in New Clark City (NCC) over the weekend.

A historical marker for the judiciary regional center was also unveiled as part of the ceremony.

The ceremony paved the way for President Rodrigo Duterte’s vision to build alternative cities to decongest Metro Manila and spur growth in areas outside of the capital.

Bersamin said that NCC is "a very promising location" because of its proximity to major infrastructures, including the Subic-Clark-Tarlac Expressway, the Subic seaport, and the Clark International Airport, which will be the country’s next global gateway.

“We will establish here a fully functioning Supreme Court. We proposed to build here several buildings, the most important of which would be alternative halls of justice for when Manila will be hit by [a] disaster,” Bersamin said.

Meanwhile, Dizon thanked Bersamin for "seeing and joining the President in his vision: to build a new metropolis."

"And what better way to kick-start this new city is by beginning the setting up of government satellite offices from various agencies, including the judiciary,” Dizon said.

“We have not just planned it, we have not just talked about it, we have actually done it,” Dizon said, citing the progress of the New Clark City Phase 1A which includes the Athletics Stadium, the Aquatics Center, and the Athletes’ Village that are ready for this year’s 30th Southeast Asian (SEA) Games.

The new sports facilities were built in just 18 months since it broke ground in January 2018.

The 5.8-hectare judiciary regional center, which was conceptualized by Chief Justice Bersamin and Senior Associate Justice Antonio Carpio, will house a data and an archive center for the Supreme Court’s business and historical records, housing facilities, a training center for the Philippine Judicial Academy, and dedicated areas for the Court of Appeals, the Court of Tax Appeals, and the Sandiganbayan.

The detailed development plan for the judiciary complex is scheduled to be finished this year while construction is set to start next year.