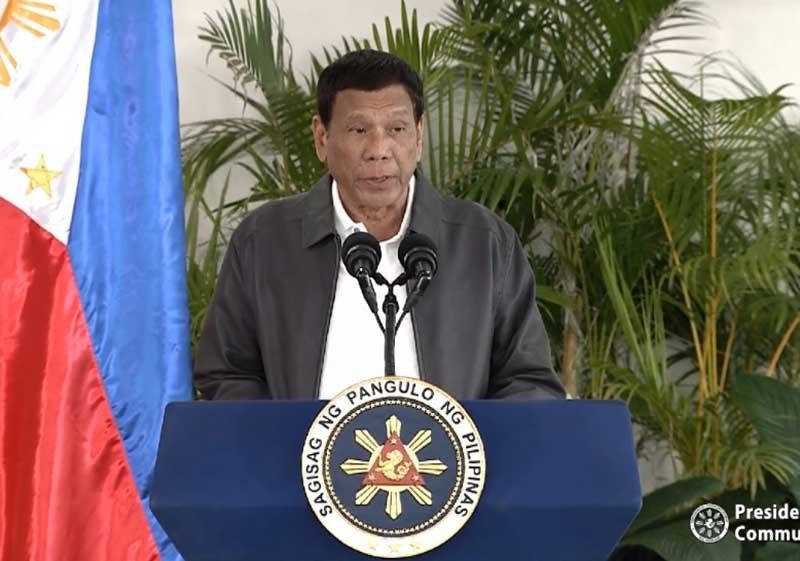 PRESIDENT Rodrigo Duterte on Sunday, October 6, clarified that the two police officials he earlier linked to illegal drugs do not hold the rank of general.

Duterte said he was confused by the former ranking used by the Philippine National Police (PNP), which referred to officers as superintendents.

“I must admit my ignorance actually... Lahat ng tao nalilito nyang supt-supt na yan. Superintendent pala yan, eh,” he said in a news conference upon his arrival Sunday at the Francisco Bangoy International Airport in Davao City, his hometown.

Duterte first revealed that “two generals” are still active in the illegal drugs trade in a speech he made during the plenary session of the Valdai International Discussion Club’s forum in Sochi, Russia on October 2, 2019.

On the ongoing Senate investigation into ninja cops, or police officers who recycle and sell illegal drugs that were confiscated during their operations, Duterte again stressed the need for due process.

“I cannot adopt the investigation of Congress as the work of the executive department. Kailangan ko na i-review yan. Tapos, kung tama lahat, eh di i-adopt ko. But then, there must be a process. It has to undergo the procedural due process

(I have to review that. If everything is in order, then I will adopt it.)

He said the Office of the President functions through the Cabinet members.

Since the PNP is under the Department of the Interior and Local Government (DILG), Secretary Eduardo Año would have to conduct the investigation and give recommendations to the President.

On the detention of Police Major Rodney Raymundo Baloyo IV, Duterte said, “That is his problem, not mine. Eh, pumasok s’ya d’yan. Mabuti’t buhay pa s’ya (He’s lucky to be still alive).”

Baloyo, who led an anti-drugs operation in Pampanga in November 2013, was cited in contempt by the Senate on October 3 for being evasive.

The operation resulted in the confiscation of about 200 kilograms of methamphetamine hydrochloride (shabu), but Baloyo and 12 other officers involved in the operation declared the recovery of only 36.68 kilograms.

They were also found later to have presented another person as the suspect they arrested after they allegedly released the first suspect in exchange for P50 million.

Baloyo and the 12 other alleged ninja cops were dismissed in November 2014, but the dismissal order was served to them only in March 2016.

PNP Chief Oscar Albayalde, who was the Pampanga police chief when the operation was conducted in 2013, found himself in hot water after it was revealed that he had called Philippine Drug Enforcement Agency (PDEA) Director General Aaron Aquino to ask that he put on hold the implementation of the dismissal order.

Albayalde is set to retire on November 8, 2019. (MVI/SunStar Philippines)