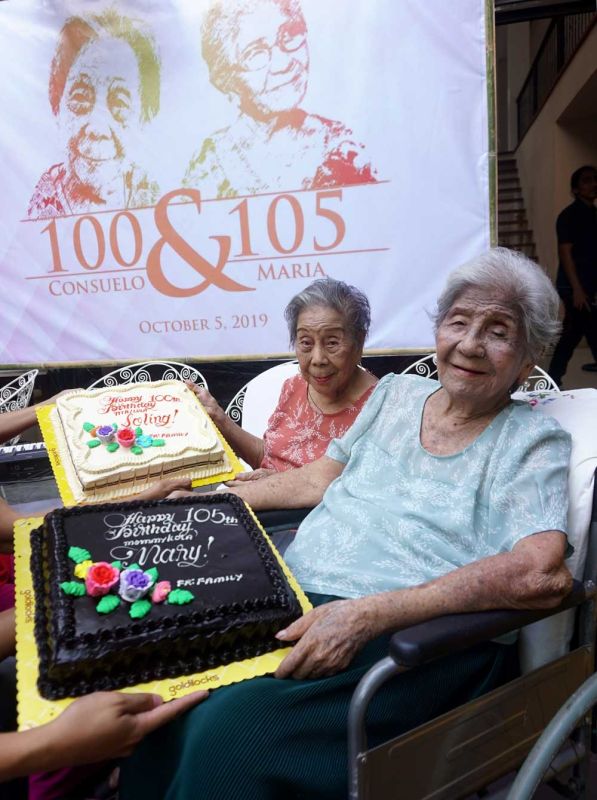 ON SATURDAY, Oct. 5, 2019, two retired teachers in the southern town of Sibonga in Cebu did not only celebrate World Teacher’s Day, they also celebrated the day they became centenarians.

Maria “Lola Mary“ Bacaltos-Canonigo and her sister Consuelo “Lola Soling” Bacaltos were surrounded by their family and friends when they celebrated their 105th and 100th birthday, respectively, at their residence in Barangay Simala.

The only surviving siblings in a brood of seven, Maria and Consuelo spend their days at home with their caretakers praying the rosary.

At 100, Consuelo still does some of the house chores.

“Mga retired na man, maghuwat na lang mi’g kinsay mubisita namo diri aron mausab among kaalegre pero kung muuli na sila sa ilang home base, mingaw na sad kaayo. Kami na lang duha (We are already retired. We just wait for our families and relatives to visit us so we can at least be merry around here. But when they go back to their home base, it will just be the two of us again),” she said.

Consuelo added that Maria’s greatest joy are her children and grandchildren, many of whom are home from abroad to celebrate with them.

When SunStar Cebu asked them about their diet restrictions, the ladies laughed, saying they don’t have any.

Consuelo said they still eat pork and pair it with vegetables.

“And I drink plenty of milk... it keeps me alive,” Maria said

During their younger days, Maria taught in Misamis Occidental with a monthly salary of P35.

Being a teacher in Misamis in the 1940s was difficult, she recalled, as there were no roads leading to the school, just vast fields. She rode a horse to reach her school every day.

When she met her husband, she transferred to Simala where she continued to teach until her retirement.

Consuelo, on the other hand, taught at the Cebu Chinese High School for 10 years in the 1950s. She transferred to the Zapatera Elementary School in 1960 and after 22 years in Zapatera, she retired in 1982. She has been living with Maria since then.

Consuelo shared that her last pay was only P800.

Their niece, Cora Ann, shared that despite her old age, Consuelo still goes to the market to buy fresh produce. She takes public transportation to go to the market and back.

She recalled that when Consuelo was 70 and got sideswiped by a car while walking on her way home from the market, she just got up and continued walking home as if nothing happened.

They sent her to the hospital fearing she had suffered injuries. Insisting that she was fine, she went home the next day.

The two also shared their wishes on their birthday.

“God has given me enough and I have to thank Him for everything. I’m only asking for God’s blessing, that’s all,” Consuelo said.

Maria also shared that she only wished to have good health.

The two centenarians also wanted to impart their life philosophy with the younger generations in their family.

Maria said she has always lived by the philosophy of offering her life to God and letting Him rule her life.

“Life is lived towards growth and when you get old and you have not finished your course, you’ll be living a life of regret,” Consuelo shared.

Under Republic Act 10868, or the Centenarians Act of 2016, centenarians are entitled to be recognized by the government and to receive P100,000, among other incentives, for reaching the age of 100.

Consuelo is awaiting her incentive amounting to P175,000.

According to her nephew, Sibonga Mayor Lionel Bacaltos, they have started processing the requirements to claim the incentive. (KFD)