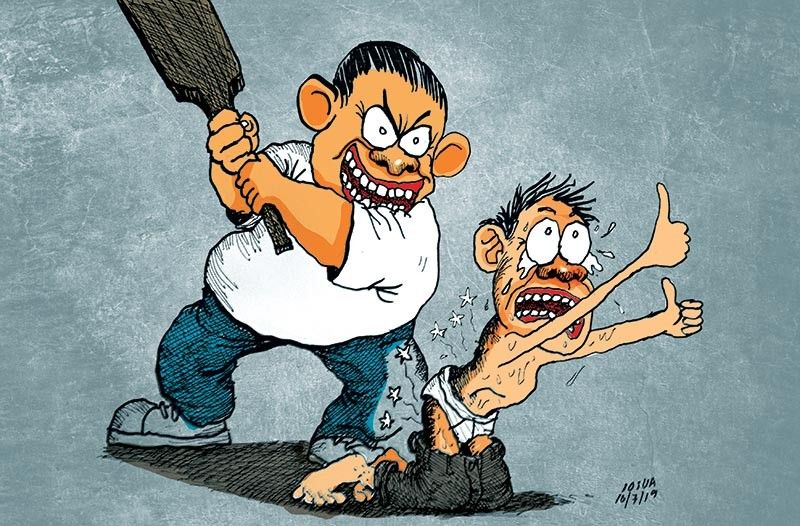 THOSE who know, don’t say. And those who say, don’t know. No pain, no gain. No cross, no crown.

These statements pretty much capture the culture of hazing in organizations. They are done in secret spaces and neophytes and plebes who agree to the ordeal are committed to some confidentiality. They agree because being embraced into the organization as a full-pledged member is reward at its highest form. The common view is that the more heightened the pain, the stronger the loyalty and commitment that are gained. Psychologist Robert Cialdini cited an observation that “persons who go through a great deal of trouble or pain to attain something tend to value it more highly than person who attain the same thing with a minimum effort.”

Practitioners of hazing keep their enthusiasm in defending these activities, said Cialdini, despite the practice being outlawed because it serves the purpose of building solidarity. Other studies also found that hazing “engender conformity within a social group.”

A research traces the term “hazing” to Harvard University where, in 1848, was used to refer to “express the treatment that freshmen sometimes received from upperclassmen.” The use was preceded in the 1670’s “hawze,” which meant “confound or frighten.” It also took root from the 1450’s French “haser,” which meant to “irritate or annoy.”

Under Section 1 of the Philippine Republic Act 8049, or the “Act Regulating Hazing and Other Forms of Initiation Rites in Fraternities, Sororities, and Other Organizations and Providing Penalties Therefore,” hazing is defined as “an initiation rite or practice as a prerequisite for admission into membership in a fraternity, sorority or organization by placing the recruit, neophyte or applicant in some embarrassing or humiliating situations such as forcing him to do menial, silly, foolish and other similar tasks or activities or otherwise subjecting him to physical of psychological suffering or injury.”

The law emphasizes that the “organizations” cover the police and military, including the Philippine Military Academy. However, with due recommendation from the chief officers of these organizations, physical, mental and psychological testing to determine the fitness of a prospective member are not considered hazing.

The other sections of the law, however, enlist a number of punishments depending on the gravity of injury the practice of hazing has caused upon a prospective member.

Former Philippine National Police (PNP) chief and now Senator Bato dela Rosa and PNP Chief Oscar Albayalde, although later clarifying their stand on hazing, earlier admitted that they have been at one time or another been recipients of the practice in their cadet days at the PMA. De la Rosa said it was hazing that molded him into the person he is now. Albayalde said hazing is a matter of perception, and later condemns the death of PMA Cadet 4th Class Darwin Dormitorio as an “affront” to PMA values.

Hazing, because of its secretive nature, is a practice that is difficult to stop. Although the law requires written notice before any act of initiation is done with the presence of school authorities, ground reality tells a different tale.

Although that doesn’t mean we give up on vigilance against any act of violence done on individuals, be they as a means to test their zeal for membership in groups or whatnot.