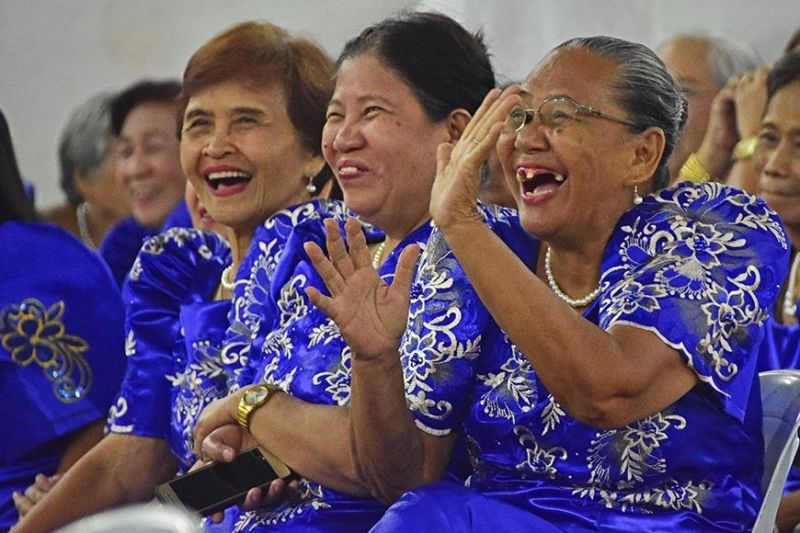 DAVAO. Senior citizens of District Poblacion-B in Davao City are in happy spirits after Davao City 3rd District Councilor Wilberto Al-Ag announced that they are proposing a P3,000 annual pension for senior citizens. However, individuals must be active in their communities to be included in the annual pension. (Photo by Macky Lim)

THE Davao City Government is planning to give P3,000 annual pension to senior citizens, as a counterpart to the Department of Social Welfare and Development's (DSWD) yearly pension of P6,000.

Al-ag, who chairs the City Council committee on social services, said the proposal will be approved on third and final reading Tuesday, October 8.

"Partial pa lang na nga amount, pero aduna ta iparehas sa Manila ug Cebu (This is only a partial ammount. We will counterpart the amount similar to Manila and Cebu)," Al-ag said, adding that the city government is finding ways to finance this.

DSWD has been providing since 2011 a P6,000 pension annually to indigent senior citizens under the Social Pension Program for Indigent Senior Citizens, as mandated under Republic Act 9994 or the Expanded Senior Citizens Act of 2010.

Meanwhile, Al-ag said all Davao City-residing seniors who is a member of a senior citizen association accredited by the Office of the Senior Citizens (Osca), will be able to avail themselves of the city pension.

He also said the pension will be given directly to the association president, which they will be tasked to allocate it to their members.

The councilor said the proposed pension will be given every second week of November, yearly.

Based on the Commission on Elections (Comelec) 11's 2019 data, the city has an estimated 140,000 senior citizen registered voters. While DSWD, with the same year, recorded an estimated 80,000 active members who availed the agency's annual pension.

Federation of Senior Citizens of Davao president Albina Sarona said the proposed pension will benefit senior citizens who are financially struggling daily especially when it comes to their medication.

However, she said the Council needs to legislate more ordinances to cater to the needs of senior citizens. (With Elijah Romero, UM Intern)