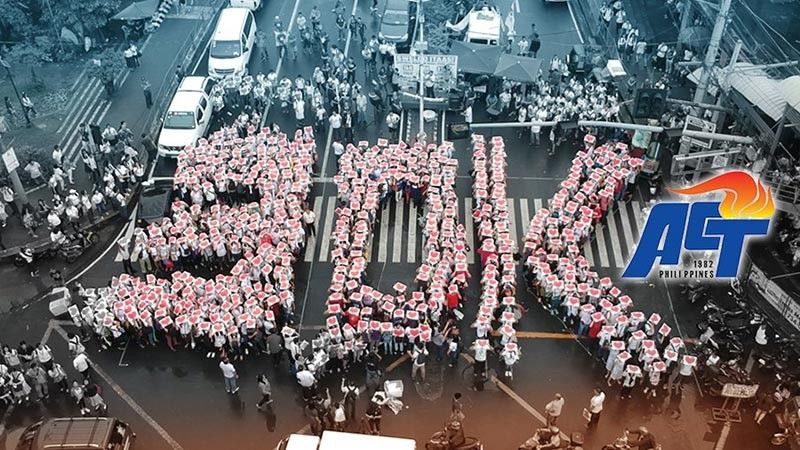 MANILA. Manila teachers marched from Derhum Street in Taft Avenue to Cuneta Astrodome in the division's World Teachers’ Day celebration. They formed a giant “30K” on the astrodome floor as part of their continued call for substantial pay hike. (Photo from ACT-Philippines Facebook page)

A TEACHERS’ union official claimed that President Rodrigo Duterte's recent pronouncement assuring teachers of salary hike is "hanging" and "uncertain", considering the President did not specify a timeline for its implementation.

Duterte, on Sunday, October 6, said the promised salary increase for public school teachers will be granted within the year. However, he said it will not be 100 percent, as compared to the rate increase for soldiers and cops implemented in 2018.

“It’s coming, their increases. But not doubled. There are a lot more teachers, my God. But it is forthcoming,” the president told reporters in Davao City upon his arrival Sunday from Russia.

The President said the increase may reach about 35 percent.

However, Duterte said he will not give a definite timeline for the increase.

Alliance of Concerned Teachers (ACT) Davao City division president Reynaldo Pardillo said that while the group is grateful to Duterte for continuously considering the plight of the teachers, they noted that the salary hike promised by the President is long overdue.

"Sa iyang declaration man gud, hanging man gud gihapon. Wala ta kabalo asa niya kuhaon (ang kwarta),unsaon pud niya paghatag ug kanus-a (His declaration is a bit hanging until now. He did not state where, when, and how the salary increase will be funded)," Pardillo added.

The group, however, is still hopeful that the President will be able to fulfill his promise for it will help the teachers, especially since prices of basic goods and commodities increased after the implementation of the Tax Reform for Acceleration and Inclusion (Train) Law.

In a press release, ACT Philippines said President Duterte’s recent pronouncement is "unsatisfactory and will not appease teachers’ growing restlessness amid the lack of a substantial pay hike".

“Aside from clarity, seeing as how he had media reports confused with the vague mention of a ‘35 or more’ figure for the pay hike, what we need from the President is not another empty promise but a concrete, clear-cut, and tangible measure with a definite timeline for a substantial increase for teachers and all other civilian employees,” ACT national chairperson Joselyn Martinez said in a statement.