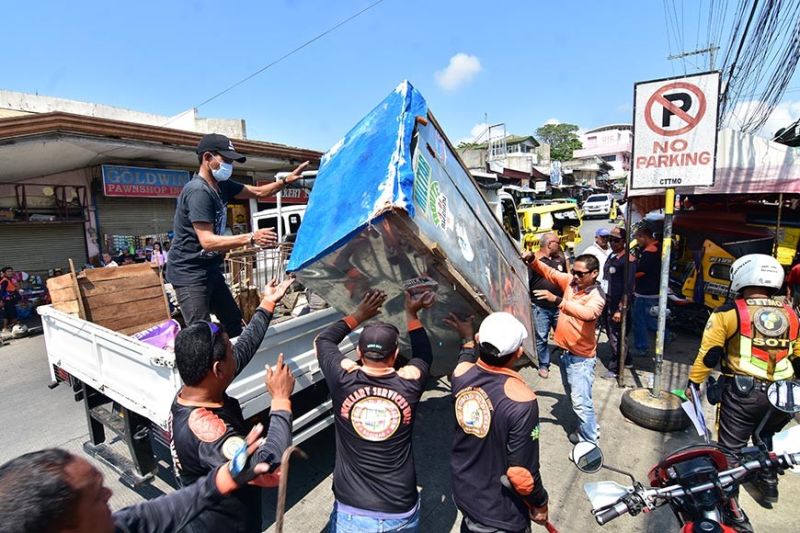 DAVAO. Davao City Transport and Traffic Management Office (CTTMO) conducts a clearing operation at the Bankerohan Market in compliance to the Department of the Interior and Local Government (DILG) Memorandum Circular 2019-121, which gave local government units (LGUs) a 60-day ultimatum to clear the roads in their respective areas. (Photo by Macky Lim)

THE Davao City Transport and Traffic Management Office (CTTMO) cleared 19 out of 41 identified roads in the city of obstructions, an official said Monday, October 7.

CTTMO head Dionisio Abude said the city is already 46.34-percent compliant to the Department of the Interior and Local Government (DILG) Memorandum Circular 2019-121, which gave local government units (LGUs) a 60-day ultimatum to clear the roads in their respective areas.

Abude said their operation has continued even after the lapse of the 60-day ultimatum last September 29.

"Padayon gihapon ta sa atong operation. Since naa pa ta areas nga wala pa naclear. (Our clearing operation continues, since there are some areas in the city that weren't yet cleared)," he said after the flag raising ceremony at the City Hall of Davao Monday.

Abude, meanwhile, said there are some store owners, particularly street vendors, who pleaded for them to return on their spot, days after they voluntarily vacated their spot.

However, there have been no reports yet of violators re-occupying these cleared areas, the official said as establishments who would continue to install illegal structures will have their businesses cancelled at the City Business Bureau.

"Kung naa gani mu-attempt og balik, didtoa na nato ipatuman ang atong legal remedies (If there are still those who would attempt to return to these vacated areas, we will now be imposing our legal remedies)," Abude said.

DILG-Davao Regional Director Alex Roldan, in a previous interview, said LGUs are mandated to enforce the issued memo, which was issued days after President Rodrigo Duterte ordered the clearing of public roads of any obstruction during his fourth State of the Nation Address (Sona) last July 22.